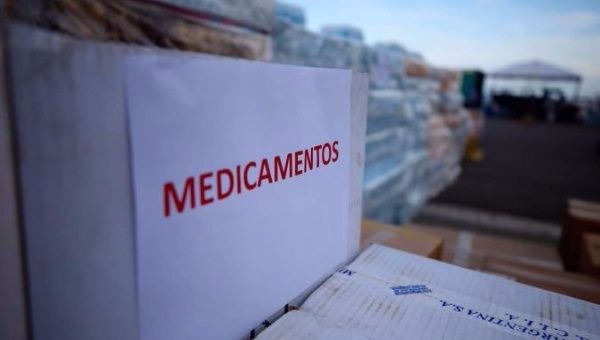 A portion of the 10 tons of medicines, consumables and other items Venezuela sent to Cuba to assist in recovery efforts after Hurricane Irma. | Photo: Twitter / @NestorReverol

Brigades of the Ministry of Agriculture and Communal Services are working jointly in Havana to assist in recovery efforts.

Cuban brigades and volunteers are continuing the arduous task of rebuilding after the damaging and deadly effects of Hurricane Irma, a historic tropical storm that left dozens dead and caused widespread damage.

Brigades of Cuba’s Ministry of Agriculture and Communal Services are working jointly in Havana to assist in recovery efforts, Cuba Debate reported.

Armando Perez Terrero, provincial director of the Agroforestry Company, said his group has been restoring sanitation services in Revolution Plaza since Sunday. The work includes pruning trees and collecting branches and logs, which hamper electric grids and the transit of pedestrians and vehicles.

He noted that the group will continue to carry out these activities throughout the week, adding that they’re working with more than 150 auxiliary workers from the Communal Services.

While electric services are gradually being restored in the northern province of Matanzas, the situation in the southern province of Cienfuegos is much different. Downed trees have hindered attempts to reestablish a power supply capable of activating the Carlos Manuel de Cespedes thermoelectric power plant, Cuba Debate added.

Described by meteorologists as one of the most powerful hurricanes to hit the Caribbean in a century, Hurricane Irma left a path of widespread destruction in Cuba and several northeastern Caribbean Islands, especially Barbuda.

Despite internal devastation, Cuba has dispatched 771 physicians to several Caribbean islands in the wake of the tropical storm’s destruction.$