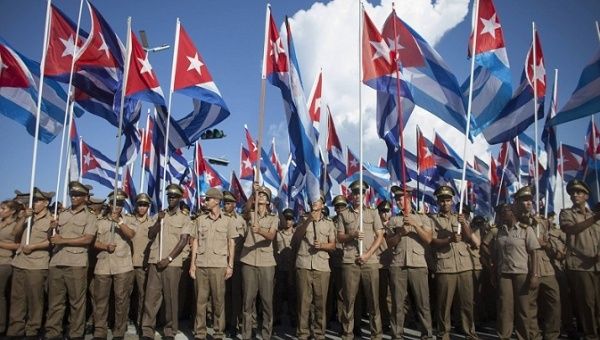 Throughout the week, the country’s plazas, parks and cultural houses will house music and dance performances.

Jan 1 (teleSur) Cuba is celebrating the 59th anniversary of its revolution as it does each Jan. 1 with a 21-gun salute at the San Carlos de La Cabaña fortress in Havana, among other events.

Fidel led the island’s socialist revolution as president until 2008, transforming Cuba into the only Latin American country with nearly no infant malnutrition or mortality, and nearly 100 percent school completion and literacy rates. Cuba’s medical schools are world renowned and its medical brigades have provided free healthcare to over 50 countries, mainly in the Global South, since the 1960s.

Among other anniversary celebrations, the Soneros of Camacho musical band will perform at the Plaza del Gallo, located in Havana’s Cultural Heritage of Humanity.

The group is being joined by the local soloists Alexis Jorge, Elif Dagtekin Fernandez and Liudmila Pardillo, as well as The Guevara, all under the musical direction of Rigoberto Alvarez.

Throughout the week, the country’s plazas, parks and cultural houses will house musical and dance performances.

The Casino Campestre will host magicians and clowns for children’s entertainment.

This morning, Iranian President Hassan Rouhani congratulated the Cuban government on its anniversary.

“I sincerely congratulate (Raul Castro) and your revolutionary people on the 59th anniversary of the victory of the Cuban Revolution,” the Iranian president said.

He also noted continued bilateral relations between Cuba and Iran, saying he hopes the two countries will expand their ties to benefit the people of both nations.

The Cuban Ambassador to El Salvador said the Caribbean nation will “continue to strengthen” the socialist revolution.

Bolivian President Evo Morales tweeted of the Cuban anniversary, “Today in history, dictator Fulgencio Batista fled to the Dominican Republic, defeated by the revolution of the Cuban people, led by Commander Fidel Castro. Thus, the end of the year marked the beginning of one of the most important anti-imperialist revolutions in history.”

Russian Foreign Minister Sergei Lavrov told RT that Cuba “has become a legend in its own hemisphere and around the world” for leading a nearly 60-year socialist revolution.

The leader of the Democratic People’s Republic of Korea, Kim Jong-un, also expressed solidarity with the Cuban revolution, and his desire to deepen ties and friendly relations between their countries.