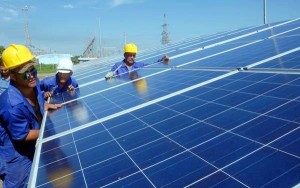 The seven new parks will add 8.15 megawatts to the island’s growing renewable-energy portfolio. Cuba is planning to increase the share of renewable energy from 4% today — most of it from sugarcane bagasse — to 10% in 2020.

In addition to the solar parks that feed into the national grid, Cubasolar, the government agency in charge of solar energy, has installed solar arrays in 410 schools, 165 public TV rooms, 20 social clubs, and 500 residences in rural off-grid areas.