Cuba bounces back by cruising past China 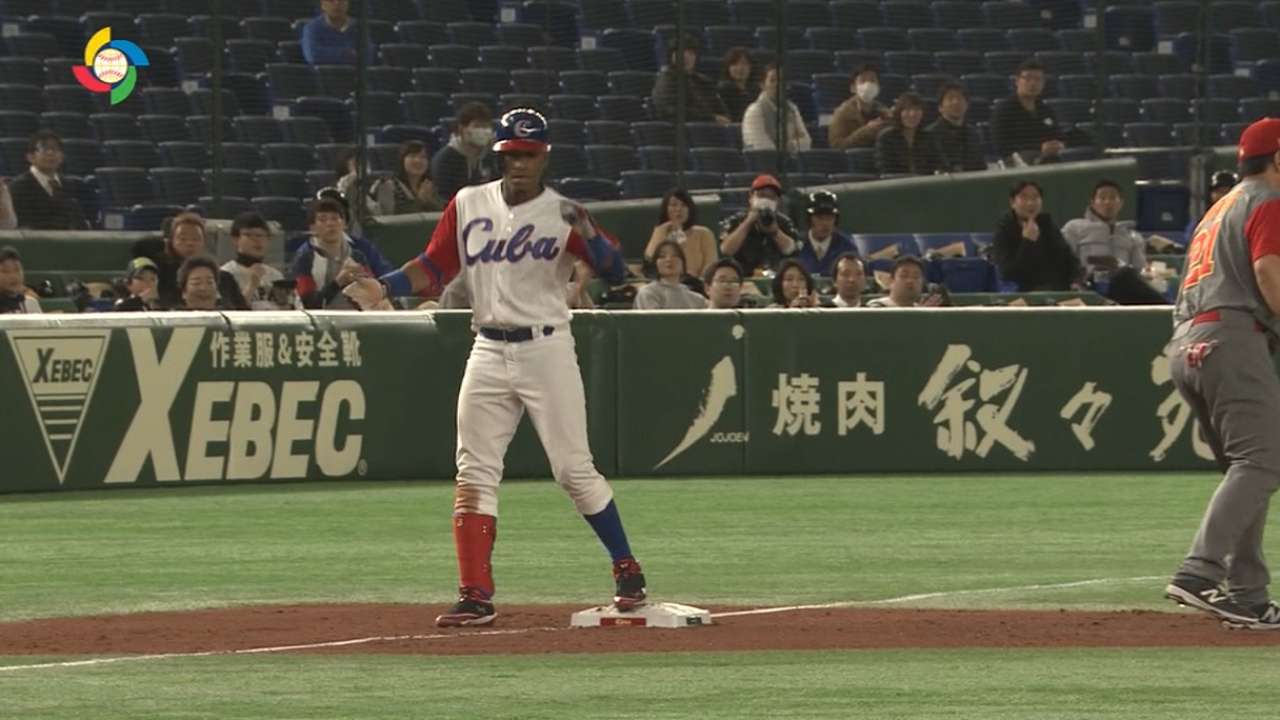 Santos’ two-run triple 0:21 Roel Santos drives a triple to the warning track that one-hops off the wall, plating two runs to put Cuba up 3-0 in the 4th inning

TOKYO — An opening loss to Japan put Cuba under pressure in the World Baseball Classic, and three innings of frustration against China and Bruce Chen only made things worse.

Then manager Carlos Marti called his hitters together before the bottom of the fourth inning Wednesday (local time) at the Tokyo Dome. Chen, the retired Major Leaguer who is China’s best pitcher, was out of the game, which remained scoreless. It was time for the Cubans to start scoring runs.

Marti’s players responded, quickly and dramatically. Cuba sent nine batters to the plate and scored four times in the fourth, taking control of a Pool B game they went on to win, 6-0. Roel Santos’ two-run triple was the biggest hit of the inning, coming right after 19-year-old Yoelquis Cespedes drove in the first run.

“If we can win against Australia, we most likely go to the second round,” Marti said. “It’s going to be a very important game. But if we lose, it’s not the end of the world.”

Marti doesn’t want to put any more pressure on his team. The Cubans already had enough of that, as Wednesday’s game remained scoreless through three innings.

Marti said the purpose of his quick in-game meeting was simple, just a reminder his hitters needed to adjust to the slower-throwing Chinese pitchers after facing the harder-throwing Japanese relievers just hours earlier in Tuesday night’s 11-6 loss.

And that was it. The Cubans started hitting, and China never did. Cuba starter Bladimir Banos and three relievers limited China to just one hit, a fifth-inning Shunyi Yang single off Banos.

“We didn’t have any hitting at all, and that’s a lot of credit to the Cuban pitchers,” China manager John McLaren said.

Chen didn’t allow a run in his 2 2/3 innings, but McLaren removed him after 49 pitches to preserve his eligibility to pitch later in Pool B play. McLaren said Chen will pitch at some point in China’s final scheduled first-round game, Friday night against Japan, live on MLB.TV.

MOMENTS THAT MATTERED
The kid leads the Cubans: Yoenis Cespedes was already 23 years old when he burst on the international scene by batting .480 for Cuba in the 2009 World Baseball Classic. His half-brother, Yoelquis, is only 19 and is already an emerging star in this tournament. Yoelquis had three hits in Cuba’s 11-6 Classic-opening loss to Japan, and it was his single off the right-field wall that drove home Cuba’s go-ahead run and kick-started the four-run fourth inning Wednesday.

Chen’s 49-pitch escape: Chen, who retired in 2015 after 17 Major League seasons, is by far China’s best pitcher, so McLaren knew his best chance of advancing was to use Chen twice in the first round. To do that, Chen could throw no more than 49 pitches against Cuba. That looked like a problem when Chen had early control issues and threw 21 pitches in the first inning. Chen began the third at 43 pitches, and he allowed a leadoff infield single to Santos on a 1-1 pitch. That gave him just three pitches to retire Alexander Ayala. Chen did that, and more. On his 49th pitch, he got Ayala to ground into a double play, ending his day with 2 2/3 scoreless innings. And he can pitch again Friday against Japan, in China’s final first-round game. More >

Banos nearly perfect: Cuba held its top starting pitchers out of the opening game against Japan, believing that wins over China and Australia would be enough to advance to the second round. The plan looked questionable when Cuba lost, 11-6, to Japan, but Banos made it look better with his strong outing against China. He was in total control and was efficient enough to make it through five innings despite the tournament’s 65-pitch limit for first-round games.

Cuban bats stay hot: Cuba had nine hits in the final three innings vs. Japan, and the hot hitting continued against China. Santos, Ayala and Yurisbel Gracial each had three of Cuba’s 14 hits. Gracial, a 31-year-old third baseman who played last summer for Quebec in the independent Can-Am League, is 5-for-8 in WBC 2017.

QUOTABLE
“I knew Cuba was a very tough opponent. They’re a great country for baseball.” — McLaren

SOUND SMART WITH YOUR FRIENDS
Chen called catcher Wei Wang to the mound during the first inning, but it wasn’t because the two couldn’t get together on signs or strategy. “I can underDanny Knobler stand Spanish,” said Chen, who grew up in Panama. “And I heard the Cuban players yelling ‘in’ or ‘out’ as [Wang] set up. So I just asked him to set up later.”

WHAT’S NEXT
China: Right-hander Kwon Ju will will face Australia in China’s second game of the tournament at 5 a.m. ET on Thursday at the Tokyo Dome. The matchup can be seen live on MLB.TV or on MLB Network.

Cuba: Ace right-hander Lazaro Blanco will start Cuba’s third game of Pool B against Australia at 10 p.m. on Thursday at the Tokyo Dome. The matchup can be seen live on MLB.TV.

The World Baseball Classic runs through March 22. In the U.S., games air live exclusively in English on MLB Network and on an authenticated basis via MLBNetwork.com/watch, while ESPN Deportes and WatchESPN provide the exclusive Spanish-language coverage. MLB.TV Premium subscribers in the U.S. have access to watch every tournament game live on any of the streaming service’s 400-plus supported devices. The tournament is being distributed internationally across all forms of television, internet, mobile and radio in territories excluding the U.S., Puerto Rico and Japan. Get tickets for games at Marlins Park, Tokyo Dome, Gocheok Sky Dome in Seoul, Estadio Charros de Jalisco in Mexico, Petco Park, as well as the Championship Round at Dodger Stadium, while complete coverage — including schedules, video, stats and gear — is available at WorldBaseballClassic.com.