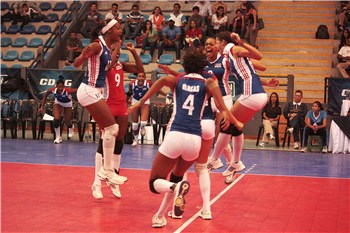 Guatemala City, Guatemala, July 11, 2014 –  Cuba and United States advanced to the semifinals as the top ranked pool winners of the NORCECA Women’s U20 Continental Championship whose preliminary phase was completed on Thursday at Teodoro Palacios Flores Gymnasium in Guatemala City.

Costa Rica, the pool winner with the lowest ranking, will play in the quarterfinals of Friday with the second placed sides in the nine-team event where the champions and runner ups receive tickets to next year’s FIVB Women’s U20 World Championship.

In the quarterfinals, Guatemala meets Dominican Republic and Costa Rica faces Mexico with the winners completing the teams in the final four round.

Friday’s schedule also features the match between Nicaragua against St. Lucia, with the winners playing Martinique for seventh place on Saturday.

Cuba 3, Dominican Republic 1
Vargas carried Cuba to the victory over Dominican Republic 3-1 (25-16, 25-16, 17-25, 25-20) and win Pool A. The 92-77 difference in favor of Cuba earned them a spot into the next round. It was an intense match, with a good tactical display from the winners. Cuba showed power from the start while Dominican Republic reacted well only winning the third set and getting very close in the fourth. Cuba’s offensive  was superior with a 54-34 margin in attacks, while both teams finished with the same figures in blocking and aces with 11 and 8, respectively. Dominican Republic wasn’t able to take advantage of Cuban’s 24 unforced errors, while committing 19 of their own. Vargas had 26 kills and 4 aces. Outside hitters Diaris Perez and Claudia Hernandez contributed with 13 and 12 points, respectively. Opposite Gaila Gonzalez led Dominican Republic with 19 points, followed by outside hitters Natalia Martinez with 13 points and Brayelin Martinez with 12 points.

United States 3, Mexico 0
United States jumped to an easy start in the first set, without any difficulties as Mexico showed insecurity. The next two sets had longer rallies while Mexico’s offensive over the net produced more points. The Americans held a wide advantage in spikes with a 42-21 margin, they were also better in the blocking category with a 7-3 difference as well as in service points by 4-2.  The 75-44 victory earned the Americans a spot in the next round. Outside hitter Alexa Smith produced 15 points, with 3 blocks included, as the best scorer for USA. Rhamat Alhassan, Mikaela Foecke and Hayley Hodson chipped in with 8 points apiece. For Mexico, outside hitter Fernanda Bañuelos was the top scorer with 8 points.

Costa Rica 3, Guatemala 2
The Costa Ricans couldn’t seal the Central American classic in three sets with Guatemala extending the match to a five set thriller in front of more than 1,000 spectators. Costa Rica finishes the preliminary round as Pool B winners and advances along with Guatemala to the quarterfinals. The winners held a 10-7 advantage in the blocking category, a 9-5 margin in service points and 45-42 in spikes.With a math-high of 23 points, outside hitter Tania Carazo led Costa Rica’s offensive line along with Monica Castro with 19 points. For Guatemala, outside hitter Maria Villagran and opposite Maria Garcia were the top scorers with 11 points apiece; Jessica Anleu added 10 points.