Cuba and The Globe Celebrate 450 Years of Shakespeare 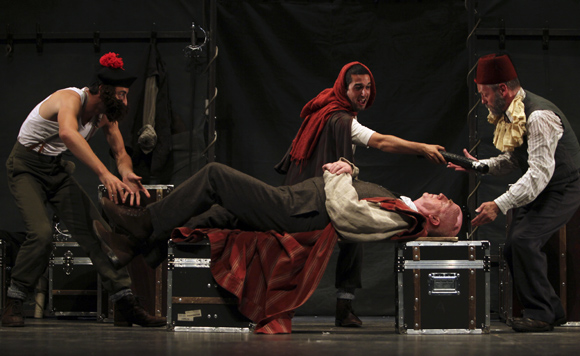 For the first time the famous theater company, The Globe, visited Havana City to present “Hamlet”.The Cuban artistic community and general public attended a presentation by The Globe, which performed “Hamlet” twice on Thursday, at Mella theater, as part of a 2-year world tour, which started last April in London to commemorate 450 years of William Shakespeare’s birth.

La Habana was the first Spanish speaking location chosen by the company after having visited: Bahamas, Norway, Rusia, Ukraine, Croatia, Finland and the United States.

The artistic director of the project, Dominic Dromgoole, qualified the world tour as an adventure to present “Hamlet” to the entire world, because the idea of communicating stories to fresh ears was always a fundamental feature in Shakespeare’s plays.

Hundreds of actors, writers, filmmakers and theater professionals attended the first presentation of this “young and fresh” version of “Hamlet”, according to its creators. This version, nearly 3 hours long, was presented completely in English with subtitles on a screen, and was very well received by the Cuban audience.

The Cuban playwright and critic, Norge Espinosa, declared, “The Globe is Shakespeare’s ambassador in the world, using young actors of different ages and ethnicities, to keep dialoguing with the English author.”

Cuba prepared several events in homage to Shakespeare. The National Ballet of Cuba is preparing a version of “Romeo and Juliet”. The Cuban Ballet has also prepared “Prologue for a tragedy”, which is related to Shakespeare’s work and to Hamlet.

The Globe will continue the tour through Central America during the next days.

The company has its headquarters in London, in the theater that has the same name, “The Globe”, re-built on 1997 as a replica of the original in which the most famous Shakespeare plays were performed, such as “Hamlet”, “Macbeth” and “Othello”. The Globe was the original “house” of “Lord Chamberlain’s Men”, Shakespeare’s theater company.