Cuba Accuses US of ‘Fabricating’ Sonic Attacks on Diplomats 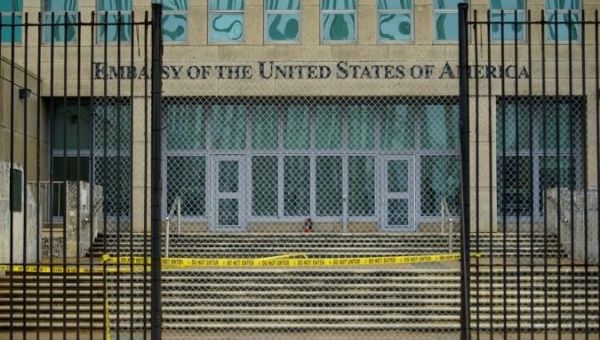 A view of the U.S. Embassy in Havana, Cuba. | Photo: Reuters

“The US government knows perfectly well that Cuba has not produced any (sonic) attacks,” said Carlos Fernandez de Cossio.

July 26 (teleSUR) The Cuban government accused the United States of trying to “fabricate a bilateral incident” with the “political manipulation” of alleged sonic “attacks” on its diplomats in Havana after examining the issue with three senior US officials.

“It is clear that the US government, in particular the State Department, has been acting with a lack of transparency, which seems to be hiding something and that, responding to certain sectors in the United States, is trying to fabricate an incident based on political manipulation” Cuban television reported.

Three U.S. officials traveled to the island after two new sonic “attacks” were reported in June against U.S. diplomats in Havana, raising the total number of affected diplomats affected to 26, according to Washington.

Fernandez de Cossi stressed that during the meeting Cuba “rejected the United States delegation’s use of the term” attack, because it considers that “it entails defamation, a lack of transparency and political manipulation” of topic.

“The US government knows perfectly well that Cuba has not produced any attacks” nor has it “allowed in the national territory any attack against US diplomats,” he said.

He also stressed that to date, Washington has “no evidence whatsoever and has not been able to present any evidence that something has even happened, (and) has not been able to reach conclusive hypothesis of any kind” about the alleged attacks that affected 24 diplomats between 2016 and 2017.

Former Cuban President and head of the Communist Party of Cuba, Raul Castro, also weighed in on the matter, saying that there is no proof of the supposed “sonic war” against U.S. diplomats in Havana last year.

“Since August last year…the bilateral relations with the United States has degraded. It is based on the pretext of health issues involving (U.S.) diplomats, in what was called by some a ‘sonic war,’ of whose origin nobody is able to explain or prove.”