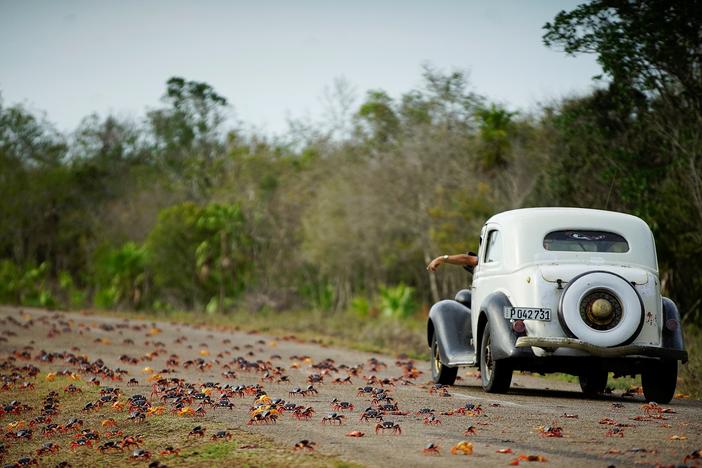 A man driving a vintage car reacts as he passes by crabs crossing a highway on their way to spawn in the sea in Playa Giron, Cuba, April 21, 2017. REUTERS/Alexandre Meneghini

Cuba’s Bay of Pigs has been invaded again, this time not by U.S.-backed anti-Castro forces, but by millions of red, yellow and black landcrabs.

Each year, after the first spring rains, the crabs march for days from the surrounding forests to the bay on Cuba’s southern coast to spawn in the sea, wreaking havoc along the way.

At dawn and dusk they emerge, scuttling sideways toward the sea, climbing up house walls and carpeting the coastal road that curves around the bay. The stench of crushed crab fills the air and their sharp shells puncture car tires.

“Thirty to 40 can enter without you even realizing it,” said Edian Villazon, who runs a food hut opposite the sea, which does not serve up crab meat. Cubans believe this type is toxic. “We have to always keep the door shut.”

The Bay of Pigs, where in 1961 Cuban exiles landed in a failed attempt to end Fidel Castro’s revolution, lies within a national park where 80 percent of Cuba’s endemic birds, along with crocodiles and other wildlife, can be observed.