Counting on all Cubans 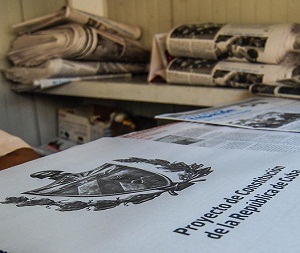 Aug 13th – All Cuban citizens living abroad have the opportunity to participate in the discussion of the proposed new Constitution of the Republic, an unprecedented step that reflects the government’s determination to take into consideration the opinions of all Cubans, both in and outside the country.

The decision was reported in a press conference offered by Ernesto Soberón Guzmán, director for Consular Affairs and Cubans Residing Abroad (Daccre), at the Ministry of Foreign Affairs (Minrex), and is a reflection of the country’s policy of strengthening ties between the Revolution and Cubans who are outside the country.

To organize the process, he said, taken into account were the growing numbers of Cubans living abroad – some1.4 million according to Minrex records, in more than 120 nations, but especially the United States.

“In an effort to guarantee the participation of all, a section on the Minrex “Nación y Emigración” wesite will be activated (www.nacionyemigracion.cu), through which Cubans resident abroad will have access to the draft Constitution and an online form on which they can insert their comments or proposals for modifications.”

Given the technical requirements this entails, including a set-up to confirm the citizen’s identity, among others, the section will be available the first week of September, Soberón Guzmán said, giving those interested some time to study the proposal.

He emphasized that once the section is operative, there will be no limitation on the number of times citizens can sign on to convey opinions, all of which will be processed in a manner similar to those gathered within the country.

He clarified that this option is for Cubans who are living abroad for personal reasons, since those serving on an official mission will have other ways to join the discussion of our future Constitution.

According to Ernesto Soberón, embassy consulates will be involved in the process, in an effort to promote active participation among Cubans living in other countries, as an opportunity to construct, all together, a more inclusive, democratic, and humanist national project “with all and for the good of all.”

In his opinion, the decision is consistent with policies adopted which have allowed for the development of more extensive ties between Cubans abroad and a variety of projects in Cuba, be they of a collaborative, cultural, sports, scientific, or other nature. He likewise noted that migratory regulations implemented over the last few years have facilitated travel abroad by Cubans for personal reasons.

Referring to the inclusion within the draft of the term “effective citizenship,” Ernesto Soberón emphasized, first of all, that this is a legal principle, not a law, and it therefore needs to be included in the country’s Constitution, so that the concept can later be codified in law.

What fundamental changes to the Constitution are proposed?

– Acquisition of citizenship in another country does not imply loss of Cuban citizenship.

– It is specified that, when inside Cuban territory, Cuban citizens are governed as such, and can only make use of this citizenship regardless of others they may hold. (This is the concept of “effective citizenship.)

According to Soberón Guzmán, this means that Cuban traveling to and from Cuba must do so with their Cuban passports.

Other principles related to requirements for Cuban citizenship remain unchanged, along with those regarding its loss or recuperation.