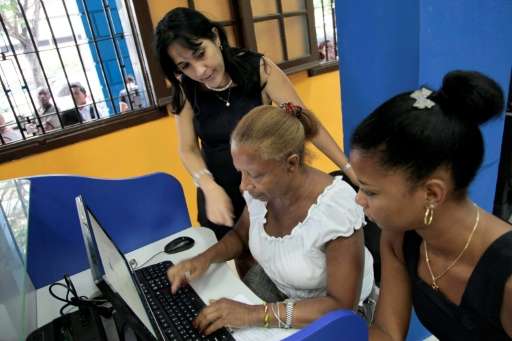 March 20 (Granma) As part of its program to develop telecommunications technologies in the country, Cuba’s telecommunications enterprise (ETECSA) continues to work on expanding the population’s access to the Internet. In this regard, the company’s director, Mayra Arevich, reported that a total of 27,316 persons have now acquired home connections, via Nauta Hogar, available on all the country’s municipalities.

“Among projections for this year, ETECSA intends to install 150 new hard-wired and wireless navigation areas; provide more than 52,000 home connections; increase by 5,000 data services to national entities; establish other agreements with enterprises to advance the development of contents on a national level; and initiate internet service for cellular telephones,” she explained.

Creating required technological infrastructure, and generating Internet content along with digital services in Cuba are the two principal axes of the national computerization policy – a reflection of the will of the Party, state, and government to develop information and telecommunications technologies in the country, through a program that includes 21 projects involving the collaboration of various agencies and ministries.

Noteworthy among these are, for example, the development of technological tools associated with government and electronic commerce; digital television; the assembly of computer equipment and devices with broad participation of industry and national software enterprises, and others, indicated Wilfredo González Vidal, deputy minister of Communications.

Other aspects of the process are the digitalization of public records; expansion of online payment and banking services; the installation of 936 automatic tellers in 69 municipalities; and the four million magnetic debit cards in use.

In the case of sectors as important as health and education, progress has been made in the comprehensive hospital management system and digital clinical histories, as well as public platforms created to promote online learning, such as Cubaeduca.

This information was shared during a panel discussion yesterday, prior to the inauguration of the 18th International Informatics Conference and Fair, which will run through the 23rd in Havana’s International Conference Center and the Pabexo exposition grounds. On hand for the occasion were Miriam Nicado, Political Bureau member and rector of the University of Computer Sciences, as well as Maimir Mesa Ramos, minister of Communications.