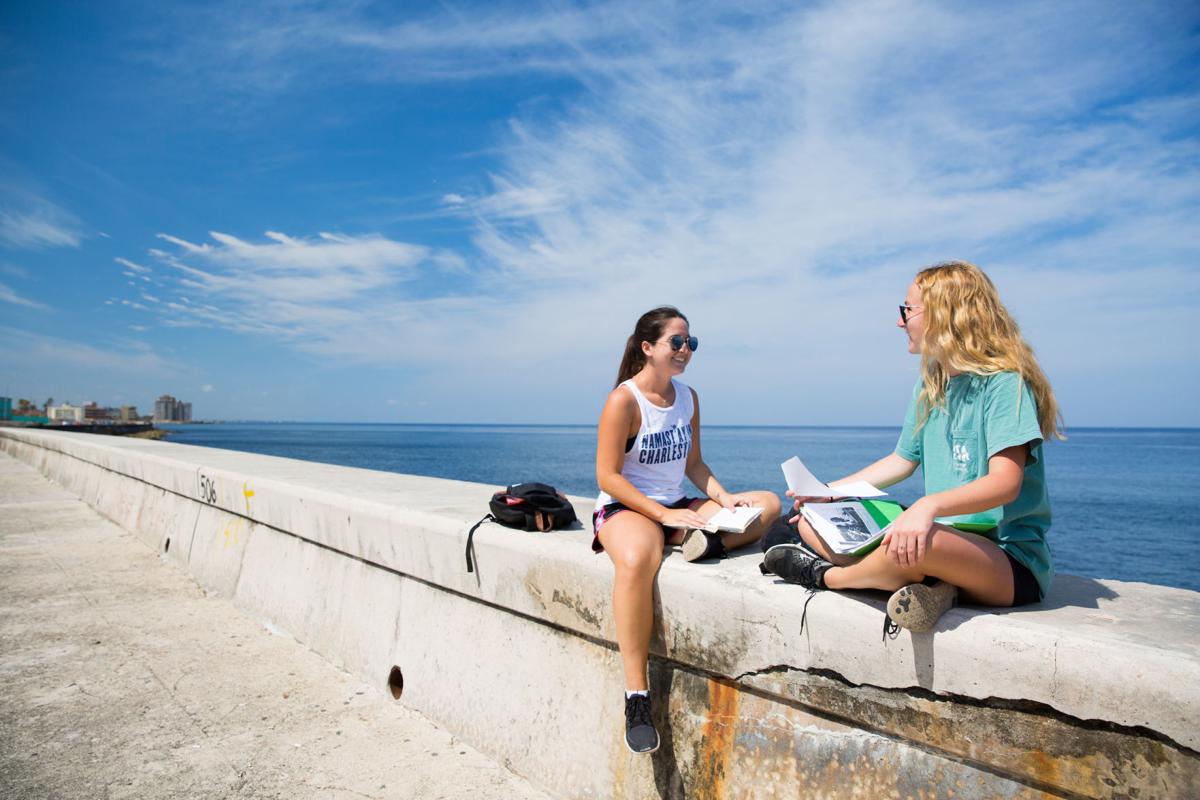 Three years ago, retired English professor Sylvia Gamboa and her husband Joseph visited Cuba. The trip fascinated them, and stirred memories in Joe who, as a junior Navy officer in October 1962, was on a ship parked in the waters off the island during the Cuban Missile Crisis.

The experience gave Sylvia Gamboa an idea. She had organized three large-scale interdisciplinary projects at the College of Charleston before, so why not do another?

She spoke with Mark Sloan, director of the Halsey Institute of Contemporary Art, who told her he was planning to bring Cuban artist Roberto Diago to Charleston in the spring semester of 2018. The timing was perfect.

“It takes three years to put a project like this together,” Gamboa said.

The first year you query faculty and staff to ascertain interest and secure commitments; the second year you develop special courses and related extracurricular activities; and the third year you build a website and marketing plan, then launch the initiative.

Starting next month, the college will present “Cuba en el Horizonte” (“Cuba on the Horizon”), a variety of Cuba-related art shows, movie screenings, lectures, courses, and newly penned essays and performances. Many of the events are free and open to the public. All will examine aspects of Cuba and consider Cuban-American relations and perspectives.

Students will get to study the influence of Cuba on Ernest Hemingway, the life of Che Guevara, Afro-Cuban history and culture, the question of the Guantanamo Bay prison, Cuban arts and culture and history, historic preservation and more.

The theater department will present “We Without Walls: An Evening of Readings by Maria Irene Fornes” March 9-11 at the Chapel Theatre. Tickets are $5. Fornes is an important playwright who won her first of nine Obie Awards in 1965 and was a Pulitzer Prize finalist in 1990. The readings will be staged.

Ruth Behar, author of “Lucky Broken Girl,” will deliver a lecture on April 5 about growing up Cuban and Jewish in the United States.

The “Cuba on the Horizon Finale,” scheduled for 5 p.m. April 7 at the Sottile Theatre, will present a program of music and dance featuring Michael O’Brien, Rob Taylor, Yuriy Bekker, Kristen Alexander and student performers. Tickets are $15.

“It brings together faculty who often don’t work together,” she said. “We all learn a lot, those of us who work on these projects, and usually something special happens to someone.”

When Gamboa organized “The Vietnam War: 25 Years After” in 2000, it prompted George Hopkins to write a paper about the war that was published in a prestigious journal and won a prize.

When she organized “The Jazz Age” project in 2003, it inspired Karen Chandler to start the Charleston Jazz Initiative in collaboration with Jack McCray.

Lola Colomina-Garrigos, director of the Latin American and Caribbean Studies at the College of Charleston, oversees the college’s study-abroad program, which for 17 years has taken students to Cuba each spring semester.

“Cuba’s political history, and its relationship with the United States for the past 150 years, is misunderstood,” Colomina-Garrigos said. “I think this black-and-white idea about Fidel Castro in Cuba portrays an image that’s not accurate and does not do justice to the country’s history, particularly its history as a colony.”

So the college’s “Cuba on the Horizon” initiative attempts to provide a more complex and nuanced view of the island, its culture and its history.

“It’s a wonderful way to introduce Cuba to students and to the Charleston community,” she said.

Gamboa hopes the initiative will satisfy people’s curiosity and open their minds about Cuba.

“We live so close but don’t know much about it,” she said. “I think this project will broaden what people think they know about this country.”

For a full calendar of events and other information, go to www.cubaonthehorizon.cofc.edu.