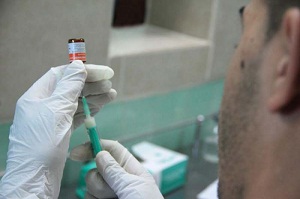 A total of 98 clinical trials are being conducted at this time around the country addressing different diseases, reported Dr. Alberto Hernández Rodríguez, director of the National Clinical Trials Coordination Center (Cencec), during the International Workshop on Design and Management of Clinical Trials, held in Havana’s Conference Center.

Some 67% of these, he said, involve the treatment of cancer in different parts of the body, fundamentally therapeutic injectables, developed by state-of-the-art biotechnology research institutions in Cuba, such as the Molecular Immunology Center (CIM), the Genetic Engineering and Biotechnology Center (CIGB), and others.

In regards to the recent approval of clinical trials in the U.S. for the Cuban lung cancer treatment, Cimavax, already approved and used widely in our country, Dr. Hernández explained that this will serve to confirm the effectiveness and safety of the drug, which were demonstrated in Cuba during trials conducted by Cencec.

Over 25 years, this institution has developed many strengths, among which the director emphasized the experience of conducting 150 trials for 28 medications developed by Cuba’s biotechnology and pharmaceutical industry to address more than 25 diseases. While the majority involved the treatment of cancer, other illnesses like vitiligo and heart disease have been conducted as well.

Dr. Hernández cited the development of recombinant streptokinase, approved in the 1990s, which has led to a significant decrease in deaths due to myocardial infarction.