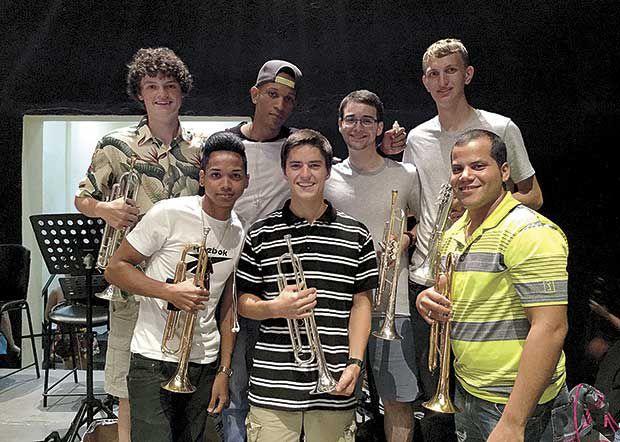 CIRCLE PINES — A local high school student got the experience of a lifetime earlier this summer when he got to take his musical skills abroad.

Chad Ziemer, a resident of Circle Pines, is a home-schooled high school senior and a member of the Minnesota Youth Symphonies (MYS). This fall he will continue taking post secondary enrollment option classes (PSEO) classes at the University of Northwestern in St. Paul. In late June he traveled with MYS on a tour to Cuba.

Growing up, he was involved in the Shoreview Homeschool Band for six years, where he started taking private trumpet lessons. He found out about MYS from one of his teachers. “He was very enthusiastic about it. He showed me what and how to practice to audition,” Ziemer said.

MYS is one of the nation’s premier youth orchestra education programs and has students from all over Minnesota and western Wisconsin. It has three full orchestras and one string orchestra; approximately 400 students participate annually. MYS aims to enrich and inspire K-12 orchestral musicians by providing professional, comprehensive educational experiences and to thrill audiences with outstanding performances.

Although Ziemer had never been to Cuba, he has traveled to Israel, Spain, Canada, Mexico and also has taken cruises to the Bahamas and Jamaica.

When the musicians were not being tourists, they were immersed in the culture by performing concerts and participating in musical exchanges or side-by-side performances, where youth from MYS played alongside professional and youth musicians from Cuba. During the exchanges the musicians sight read Cuban music in addition to playing music under a Cuban conductor.

“It was a great experience. I was able to learn and play with other musicians. Even though it is a different culture, we are all learning about the same things,” he explained.
Ziemer’s favorite musical exchange was with Orquesta Sinfónica de Holguín because halfway through the performance the power went out. Audience members, extra stage hands and the musicians pulled out their phones so they could see their music and the concert went on. “It was awesome. It was pitch black and we were playing in the dark,” he said.

Ziemer really enjoyed eating the Cuban cuisine, which he said almost always consisted of multiple courses. He also liked walking the streets, seeing the sites and experiencing the culture.

“It is always great to see how people live in their own country and learn about their historical and cultural backgrounds,” he said.

After Ziemer graduates this year, he hopes to join the Air Force Reserve Officers’ Training Corps (ROTC) program. After graduating from ROTC, he plans to pursue an education in criminal justice and music in order to pursue a career in law enforcement while continuing to pursue his love of music.

Editor’s note: Chad Ziemer, along with his siblings, have been carriers of the Quad Community Press since September 2011.