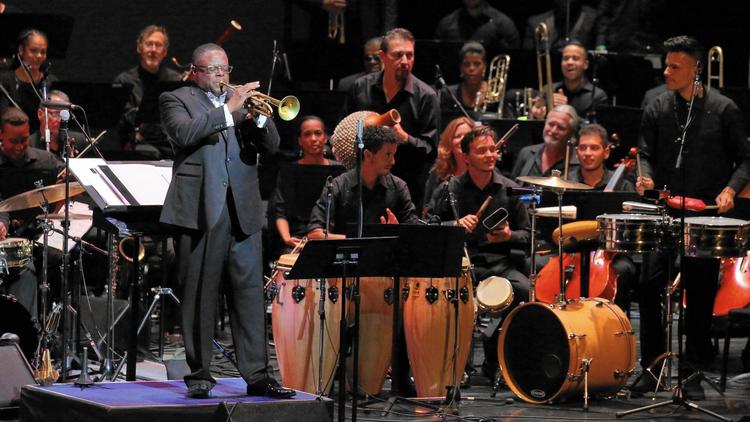 Chicago trumpeter Orbert Davis performs with the Chicago Jazz Philharmonic and student musicians from Havana in the concert “Scenes from Life: Cuba!” on Nov. 13, 2015, at the Auditorium Theatre in Chicago. (Brian Nguyen / Chicago Tribune)

Relations between the United States and Cuba heated up by several degrees Friday night, thanks to an audacious, cross-cultural experiment that crowded the enormous stage of the Auditorium Theatre.

Leading a dramatically expanded version of his Chicago Jazz Philharmonic, trumpeter-composer Orbert Davis achieved the elusive goal of bringing roughly three dozen students from Havana to perform here with the Chicagoans. Before President Barack Obama and Cuban President Raul Castro announced a diplomatic breakthrough last December, such a venture would have been very nearly impossible to pull off.

But Davis and a few colleagues from the CJP happened to be in Cuba teaching the students on the historic day that Presidents Obama and Castro trumpeted the news on TV in speeches heard around the world. The development galvanized political and cultural forces on both sides of the Straits of Florida to champion Davis’ Chicago-Havana connection. And it catapulted the Chicago Jazz Philharmonic onto CBS’ “60 Minutes,” which also was in Havana covering the big news and focused its cameras on the CJP.

Though Davis and his organization still had to spend months cutting through red tape to enable the young musicians to fly to Chicago — with most delayed until late Wednesday, leaving minimal time for rehearsals — the grand concert that Davis envisioned somehow, improbably, actually happened.

You’ve heard of the Buena Vista Social Club? Meet the Orbert Davis Social Club, a gathering of dozens of exceptional Chicago artists and inspired Cuban students who want nothing more than to make music together and nothing less than to re-establish contact between two nations linked by one sound: jazz.

The concert opened not with performance but with video, a brief documentary telling the story of the momentous events leading up to this night. Next came renditions of both countries’ national anthems, two flags projected on a gigantic screen in a tableau still rarely encountered in such a high-profile setting.

What mattered most, of course, was the music, and Davis began with further symbolism, leading his binational orchestra in his aptly named “Diaspora,” the very piece Davis was teaching the students in Havana when the news broke. Its lush string writing served as a disarming curtain-raiser for the rhythmic eruptions yet to come.

Chicagoans heard the premiere of Davis’ “Havana Blue” in April 2013, when the Chicago Jazz Philharmonic Chamber Ensemble shared the same Auditorium stage with River North Dance Chicago. This time Davis rearranged the piece for his newly bulked-up orchestra, excerpts of the suite proving considerably more vivid, detailed and thunderous than before. The lyric tenderness of the opening “Sabor” movement, the epic grandeur of “El Malecon” and the exultant finale of “Havana at 12” — with Davis’ clarion trumpet leading the charge — would have been the high point of the evening, but for all the climaxes still ahead.

Nothing was more moving, though, than the start of the second half of the program, Davis graciously yielding the stage and the spotlight to the Havana musicians. To see and hear Ernesto Lima Parets leading colleagues in traditional Cuban repertoire was to get about as close to the melodic contours and rhythmic inflections of the island nation as possible without getting on a plane. Naturally, Parets and some of the instrumentalists began to dance on stage while the music was in progress, for in Cuba there are no distinctions between music and movement, musician and listener, performance and ritual.

As is usually the case in Davis/Philharmonic events, there wasn’t enough time to play the repertoire listed in the program. The CJP should have skipped the unnecessary emceeing that wasted precious moments and bypassed repertoire that had nothing to do with the Cuban theme.

Even so, the culminating “Scenes From Life” — portions of which Davis had led in Havana last year — provided an aptly rousing close to the night. The ethereal, mysterious opening pages of the “Genesis” movement eventually gave way to a surging motif pushed forward by a relentless undercurrent of percussion. The “Family Portraits” and “Patrimonio” sections produced vibrant symphonic color, driving layers of rhythm and high-flying jazz solos from young musicians who looked as if they were surprising even themselves.

Imagine what these students and pros could attain together if their contact weren’t limited to a once-in-a-lifetime concert.

Surely that’s what Davis was thinking when he began riffing on stage about taking this Mahler-scaled ensemble on tour. Until this evening, such a notion would have seemed absurd.

Given the changing diplomatic winds, why not?