‘Che Lives in This Boricua’s Heart’: Lopez at Santa Clara Memorial in Cuba 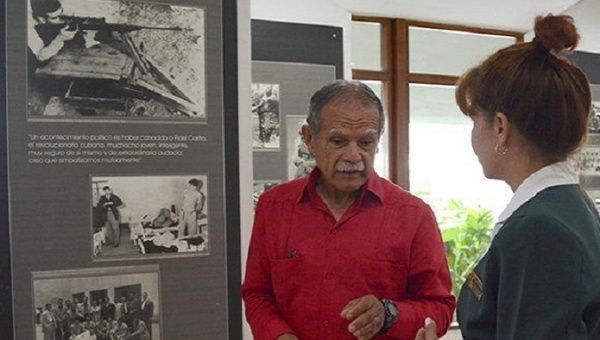 “I hope that when I get back to Puerto Rico I can share with my compatriots the moments I spent in Santa Clara,” Lopez reflected.

Nov 19 (Telesur) Puerto Rican freedom fighter Oscar Lopez Rivera visited the Ernesto Che Guevara memorial in Santa Clara, Cuba this weekend, sharing that it was a dream come true to honor one of the heroes of the Cuban Revolution.

“Che lives in this Boricua’s heart,” he wrote in the memorial’s book of visitors, “And I hope in the mind and hearts of all who love justice as they fight for a better and more just world today. Long live Che, long live the Cuban Revolution, long live a free Puerto Rico, long live Fidel.”

He went on to say that the experience filled him “with a vitality to move forward,” a sentiment shared by Gonzalez Vazquez, one of the Puerto Rican delegates accompanying Lopez Rivera to the memorial, according to Cubadebate. Also present was Tania Parra Fonseca, a representative of the Cuban Institute for Friendship with the Peoples.

“I hope that when I get back to Puerto Rico I can share with my compatriots the moments I spent in Santa Clara. This is part of that dream,” Lopez Rivera said at the Memorial Sculptural Complex Ernesto Che Guevara.

Lopez Rivera commented on the U.S. government’s attitude as it pertains to the recovery efforts in Puerto Rico, praising the mayor of San Juan, Carmen Yuin Cruz, who criticized U.S. President Donald Trump for the inadequate response to the devastation.

Having spent nearly 36 years in the U.S. prison system for his activities aimed at securing the independence of Puerto Rico and commenting on the island’s US$73 billion debt crisis, Lopez Rivera previously said, “Not a single Puerto Rican controls Puerto Rico. Those who control Puerto Rico are Washington and Wall Street.”

He also paid tribute to the victory of the Cuban Revolution by visiting the Mausoleum of the Las Villas Front.

The Puerto Rican independence leader, who was invited to the socialist country by the Cuban Institute of Friendship with the Peoples will remain in the country until Nov. 26.