Che Called Me Angalia, Tribute to the Guerrilla Fighter in Argentina 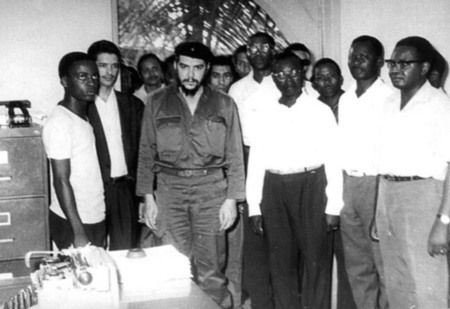 Buenos Aires, Apr 29 (Prensa Latina) A book honoring Ernesto Che Guevara, and a tribute to one of those men who fought in Congo, Luis Monteagudo Arteaga, is one of the new books published by Acercandonos Ediciones at the Buenos Aires fair.

‘Che called me Angalia’ tells the story of Monteagudo next to his ‘Commander Tatu’ in that African country, and his loyalty to Che, embodied in this text, which was published with support from the Association of State Workers (ATE), the project ‘Navegando con el Che’ (Sailing with Che) and the Latin American and Caribbean Confederation of State Workers.

‘Reading Angalia’s experiences in prose, quatrains, so experiential, moves even the most intimate fibers of the soul, making it a worthy reminder to those who gave everything. A worthy tribute to that battalion of Cubans with African origins,’ said Captain Oscar Veron, founder of ‘Navegando con el Che’, in the book’s preface.

Che revives again 90 years after being born in these pages through one of those men who was at his side in Congo when Tatu, his guerrilla nickname meaning number three in the Swahili dialect, went to fight the early 1960s for that African people.

In some 65 pages, complemented by images, Angalia, who was named by Che, with his verb and rhyme, took the reader back to those days of the revolutionary struggle and pays tribute to all those who fought in the epic.

‘I take the pen in my hand, imbued with the idea, to tell the odyssey of 126 Cubans.’ ‘I express with my heart, I never imagined that one day I would be making a revolution, along with our Che,’ the author emphasized in two of his verses.

The beautiful volume, available to readers in Buenos Aires, will be launched in Cuba on May 4 in Santa Clara, where the remains of Che are buried, and in Santiago de Cuba.