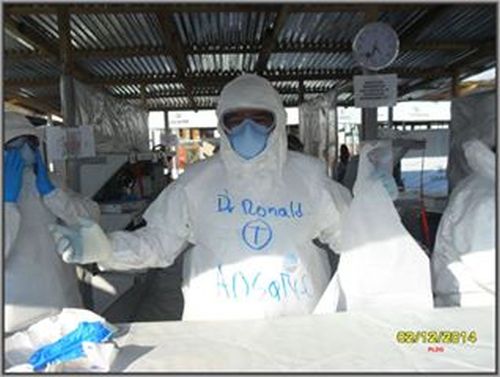 I cannot determine the moment in which Ronald and I became friends on Facebook. And I must confess that I was never inclined to tour his profile until I discovered that he could be a source of information about the work of the Cuban health brigade in Liberia.

When I first began to follow the reports about Doctor Félix Báez, I found out that Ronald was always ahead, which I confirmed on the phone conversation he had with the TV News program about the way in which the Cuban staff in that country handled the situation  of Dr. Báez.

It was how the idea of interviewing him came into my mind. “I had to go somewhere now, but I’ll be here in three hours. That will be a live interview. You ask the questions and I’ll reply. It’s that O.K. for you?”. These were his words when I contacted him last November 26th, after 10:00 in the morning.

“You’re late”. It was the first phrase he said when at 1:30 that afternoon he saw the green light on my Facebook page. I apologized to him and sent him the first question. He replied by saying he had been born in Tacajó, in the municipality of Báguanos, Holguín, but lives in Las Tunas at the moment. “My father used to live in Alcalá, but when I was nine years old we moved to Banes, where my mother’s family is from”, he added.

How did you get to study medicine, and where do you work here in Cuba?

“I began my medical studies in 1986, at Mariana Grajales Faculty of Medical Sciences, in Holguin. I went there directly from the pre-university school. I didn’t do the military service. I’ve always wanted to be a physician. My maternal grandfather was an apothecary himself. He did a thousand things, indeed. I remember him dressed in a white shirt or guayabera, wearing the golden seal for his fifty-year work in the medical field. In his retirement, he was in charge of the sport competitions held in Banes. My grandfather was a very active man who was always supporting sports”.

“I currently work at the Provincial Health Office of Las Tunas, in the primary health care department”.

Why your determination to go and fight Ebola when you know the real risks that decision implies?

“Risks are minimized with the knowledge acquired, and we’ve had good teachers. Besides, and I’ve said this before: each generation lives a historic moment. My generation missed the attack on Moncada Garrison, the Granma yacht landing, the Sierra Maestra struggle, the triumph of the Revolution. Summarizing, we missed the most important events that have occurred in the country during the last years.  This is our Moncada, our Sierra Maestra, etc, and took a step forward. Without fear, without hesitation, without been under any pressure at all, which is the first question asked by those who don’t believe in the work of the Revolution”.

Which are your experiences about the direct contact with the sick people, with the inhabitants of this country, in general? Out in the street, how do they see you?, if you have direct communication with the people outside, I mean.

“The communication with the population is limited. The people who work with us undergo a daily follow up of the temperature. But with those we get in touch with feel very thankful for the presence of the Cuban medical brigade here. Many of them always wanted that. We have less communication with the patients. Remember about our suits and the biosecurity measures. They get no other examination than taking their temperature and pulse. When dressed with the suit, you don’t know who the person is unless you read the name written on it.

“Liberians are very educated and grateful people. Although they don’t know how to read and write, they do have education. We sometimes need to buy tooth paste or other personal care products, and we go to places certified by WHO, places that meet all the requirements, and the treatment we get from locals is exquisite.

Once, when we were coming back from the training, the driver stopped and people said: “Cuba is a good people”. And it’s said by persons that hadn’t met Cubans before. Relations with both the health staff and that of the Ministry of Foreign Relations are also very good”.

Who are the most important persons for you in Cuba (…)?

“The most important persons for me are my children, my parents, my brothers and my nephews and, of course, my wife. On the other hand, we have a moral commitment with the leadership of the Revolution. It was very impressive to be seen off by Raul. He hugged us all, and asked us to return. I tried to reply to him, but I was so excited that I couldn’t coordinate my words. We have a commitment with the Ministry of Public Health, with the persons who trained us both at the cooperation central unit and at IPK. And the most important of all, our commitment with the Cuban people, who support us day after day, minute after minute, they follow us and want to know about us”.

I presume that your easy communication has to do with much reading. If so, which are your favourite?

“I read a lot. My favourite one? Garcia Márquez, Miguel Barnet, Mario Puzo. The three of them are awesome for me. I’ve read many more, but they are my favourite ones.

“Well, I must go for dinner. The car has just arrived to take us there”.

While I hurry up to thank Dr. Hernandez and ask him the last question, he writes me back saying: “Just one more question, so that you don’t feel resented towards me, hahaha”

I want to know if you were told to share things across the Network or if you do it on your own initiative.

“I was not told to promote what we do. If you check on my Facebook page, you will see it was made long ago. I did the same when I was in Venezuela, although now all the members of the medical brigade ask me to share their photos, to communicate with this or that newspaper, etc. I’m sort of reporter now, but being a physician is the number one task for me.

“Send you kisses. Have to leave now; otherwise someone will kill me…”

Ronald Hernandez Torres has more than 4 000 friends on Facebook, and has just published his first interview on the Network (http://visiondesdecuba.com/…/cubavsebola-reencuentro…/) to a Liberian who graduated in Cuba and serves as teacher of English for the Cuban health staff.