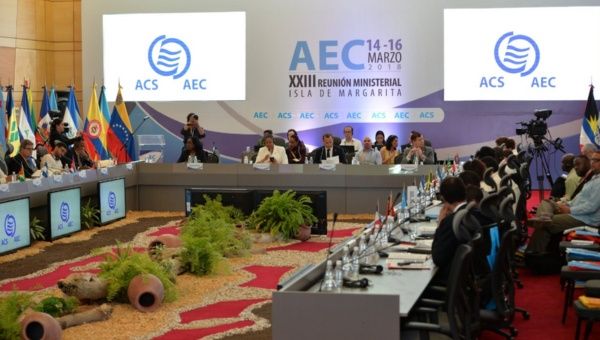 The Association of Caribbean States ministerial meeting will discuss actions to address the effects of climate change across the region.

March 15 (teleSUR) The XXIII Ministerial Meeting of the Association of Caribbean States (ACS) continued Thursday in Venezuela, where representatives from the region seek to address the effects of climate change and support the financing of projects in nations devastated by hurricanes Irma and Maria.

The closed-door meetings will also develop new plans to tackle natural disasters in 2018.

Cuba’s Deputy Minister of Bilateral Affairs Rogelio Sierra Dias said that several working days have been held to organize the second cooperation conference in conjunction with more than 70 countries.

Sierra told teleSUR that this second meeting “aims to support the financing of these projects… there are several countries like Turkey, South Korea that are willing to finance.”

Venezuela, Mexico and Cuba have announced significant contributions to these projects, however Cuba will also provide expertise in areas of interest such as the economy, tourism and trade, Sierra said.