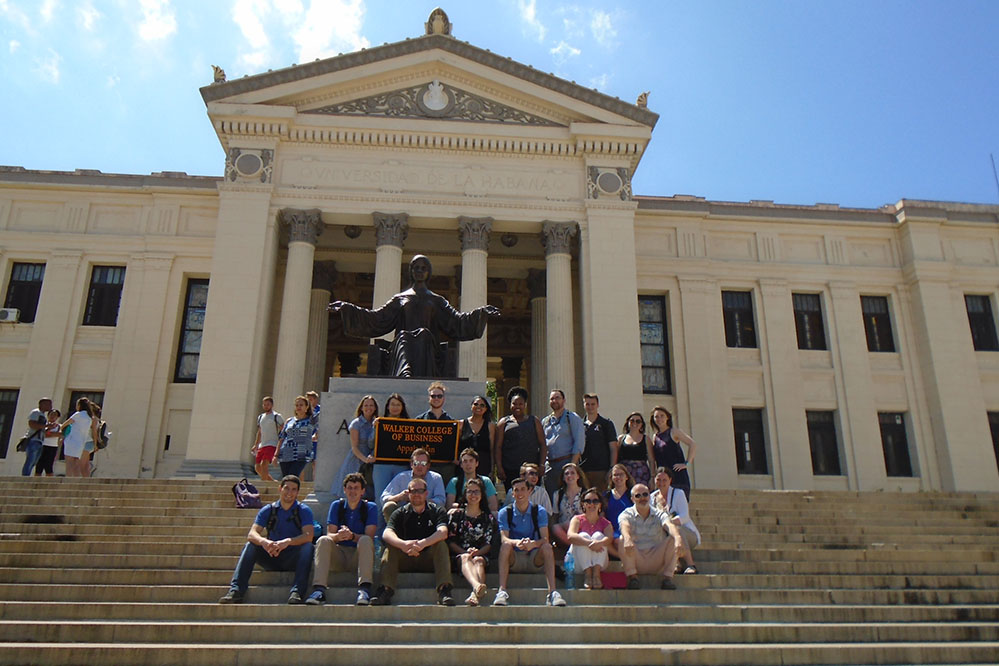 The Walker College of Business students pose in front of the Alma Mater statue on the University of Havana campus. Photo by Rachel Shinnar

Dr. Rachel Shinnar, the faculty leader for the seven-day trip, has been taking students to Cuba for the past five years. Students came from a variety of majors and represented both undergraduate and graduate programs.

The group started their experience in the city of Havana, where they met with local entrepreneurs and learned about the Cuban economy, political environment and culture. Venturing west to the town of Viñales, the group spent two days in the Cuban countryside and met with farmers and agribusiness leaders.

Travel along with the group and experience Cuba. 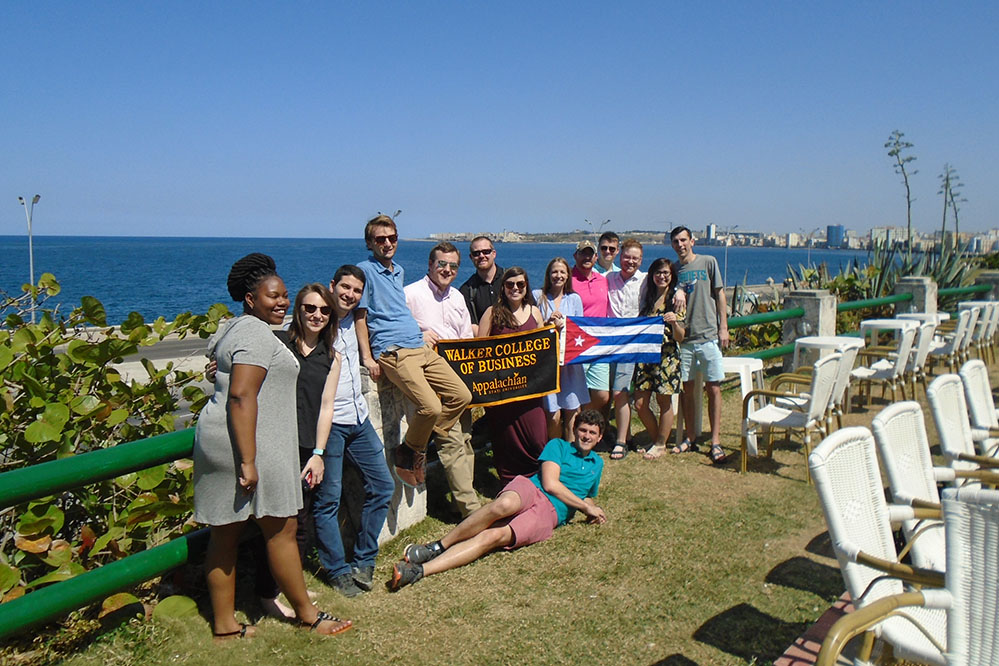 During a study abroad trip to Cuba in March, students pose on the grounds of the Hotel Nacional de Cuba, which overlooks the Gulf of Mexico. Photo by Rachel Shinnar 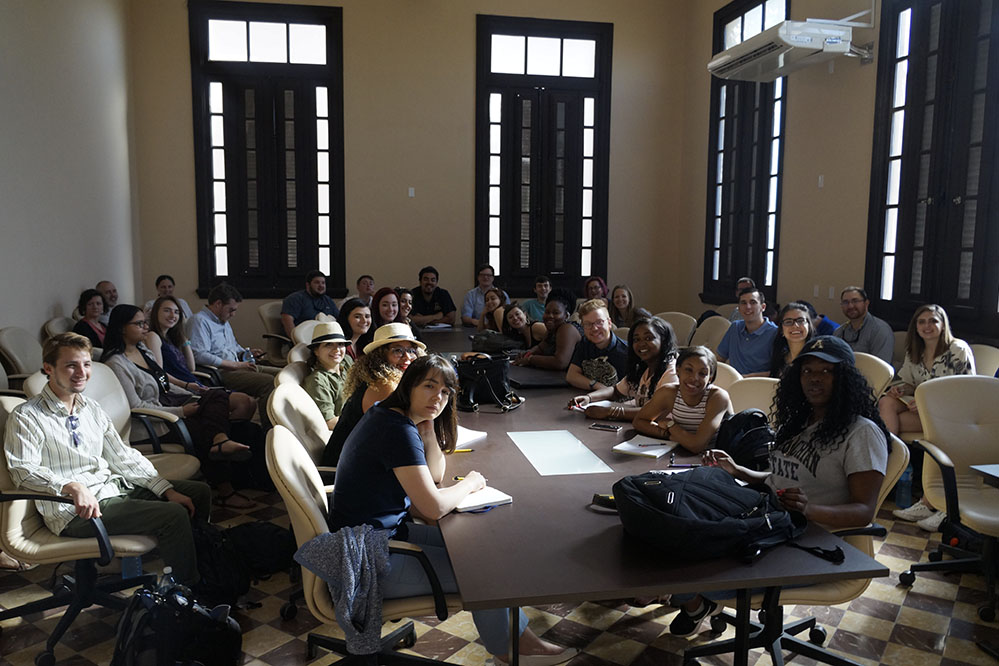 The students met up with another Appalachian study abroad group for lectures covering economics, foreign policy and political science at the University of Havana. Photo by Ben Perez 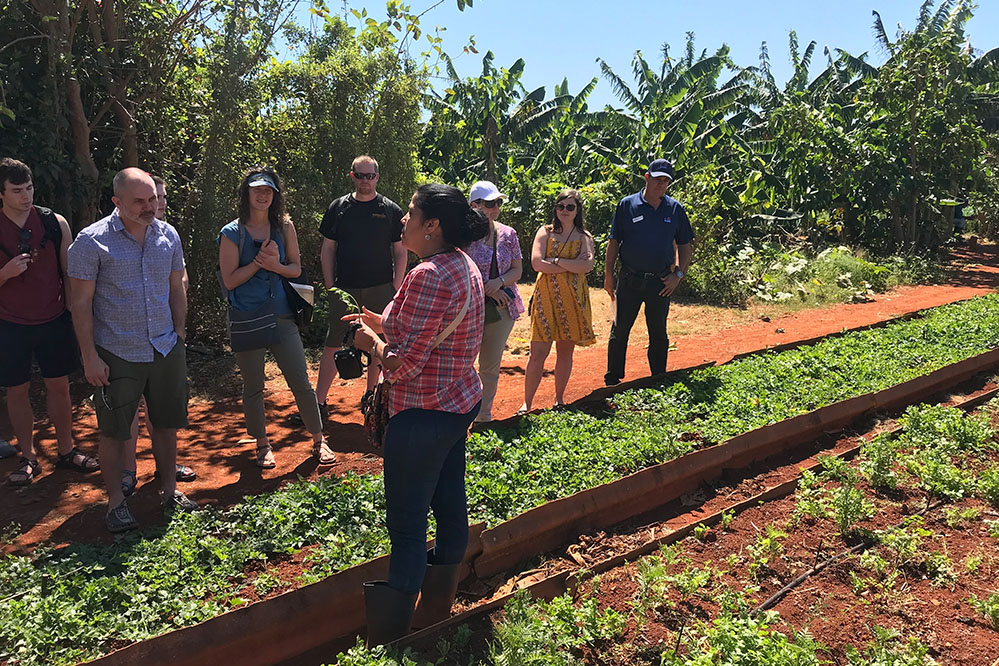 Because of restrictions under the trade embargo between Cuba and the U.S., Cuban farmers were forced to farm organically in the absence of pesticides. The group toured an organic farm that supplies fresh produce to the surrounding communities. Photo by Travis Ketchum 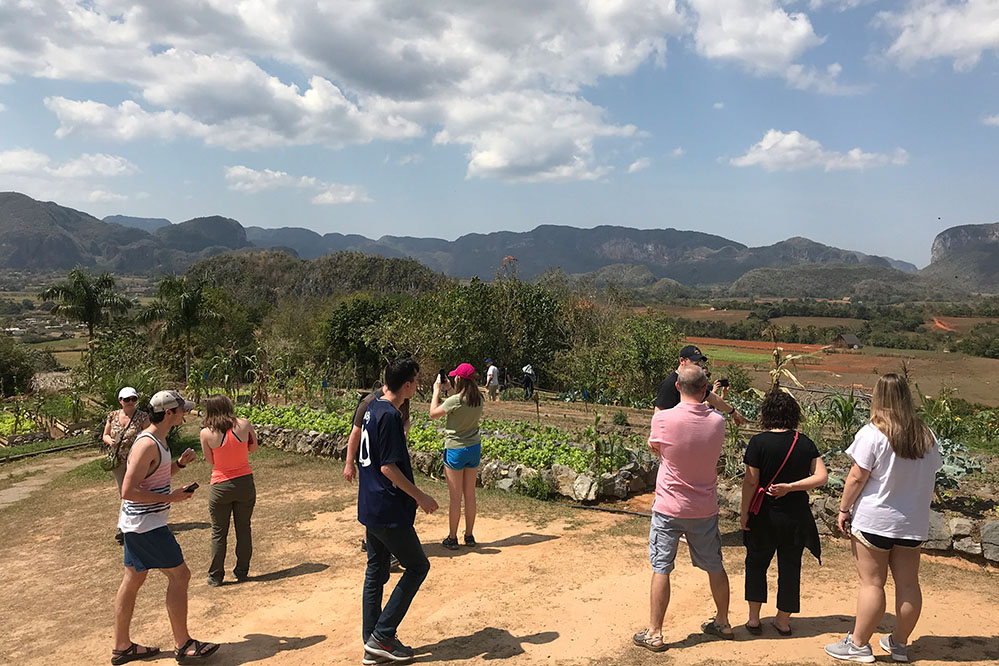 Eating from local gardens is the standard in most of rural Cuba. Here, the students visited the Finca Agroecologica el Paraiso, where they were served freshly harvested produce. Photo by Travis Ketchum 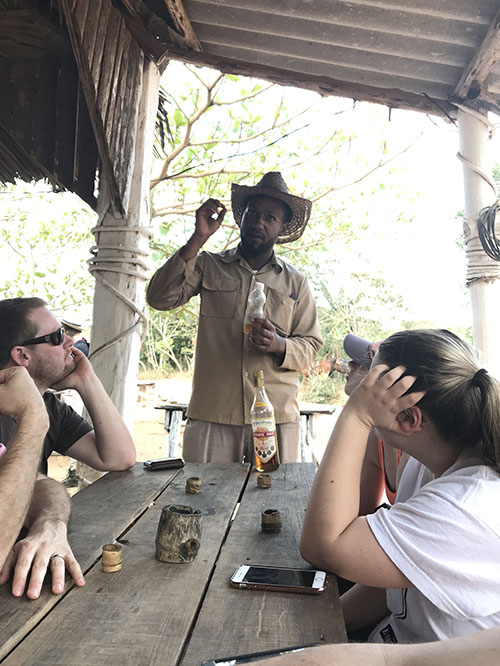 Students learn about sugar and coffee farming in Viñales, Cuba, and the process by which sugar cane is turned into rum, or “vitamin R” as the tour guide called the national beverage. Photo by Emily Smith 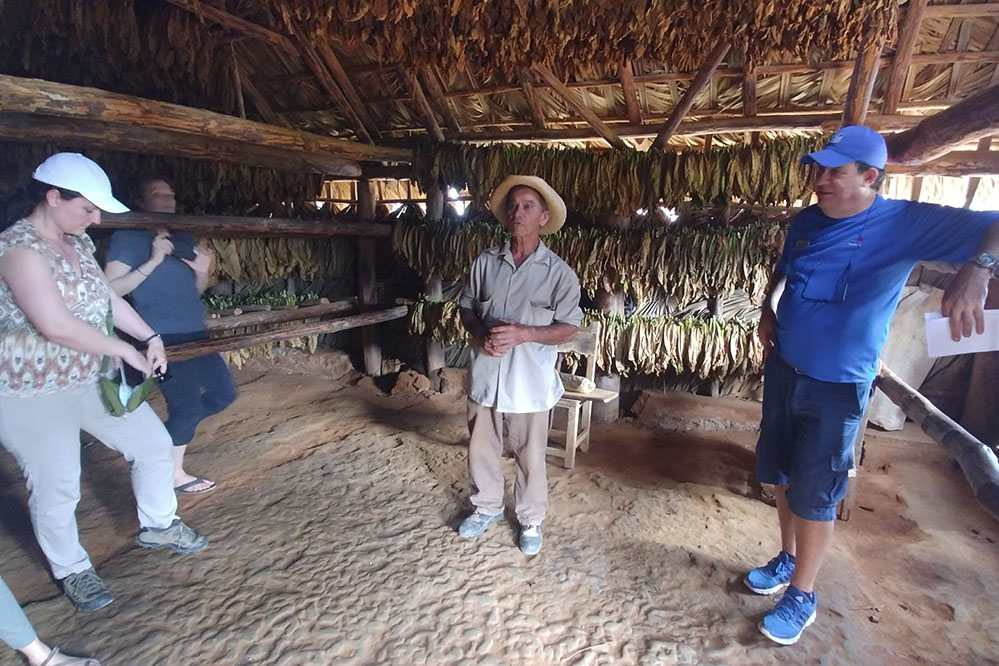 A local farmer, center, shares the ins and outs of tobacco farming. Photo by Inna Edwards 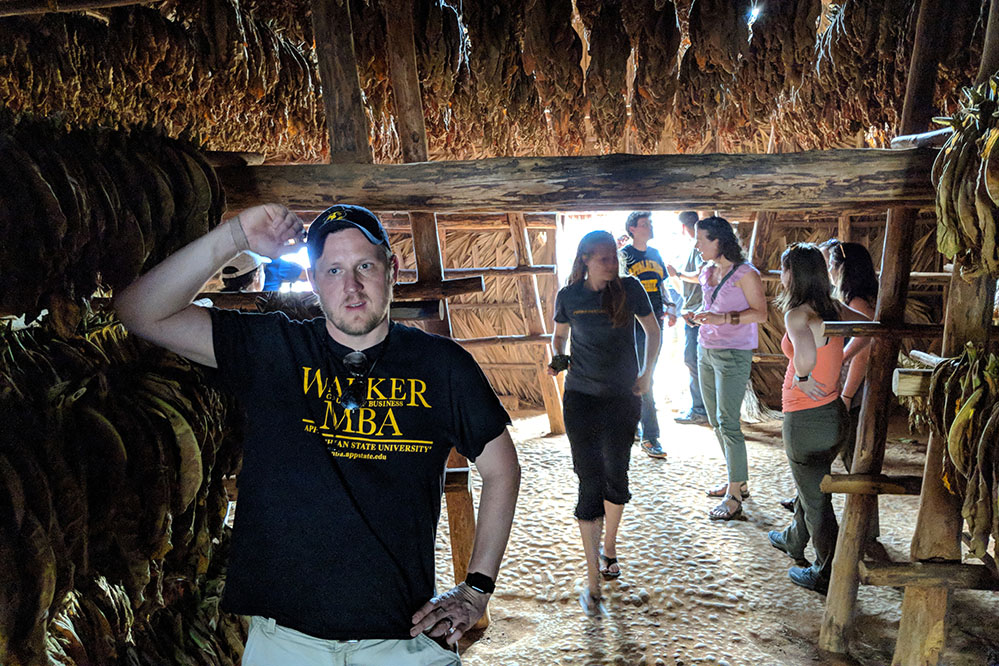 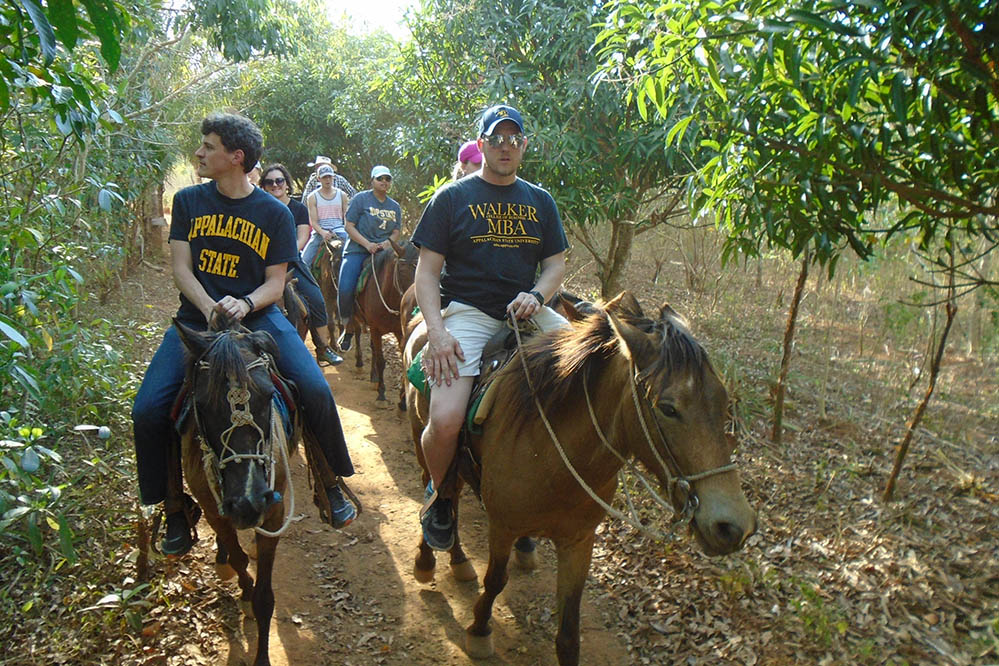 University Communications Dave Blanks leads an in-studio discussion with MBA students Chris Grulke and Ben Perez as well as Dr. Shinnar. The trip fulfilled the international component of the MBA program for Perez and Grulke. 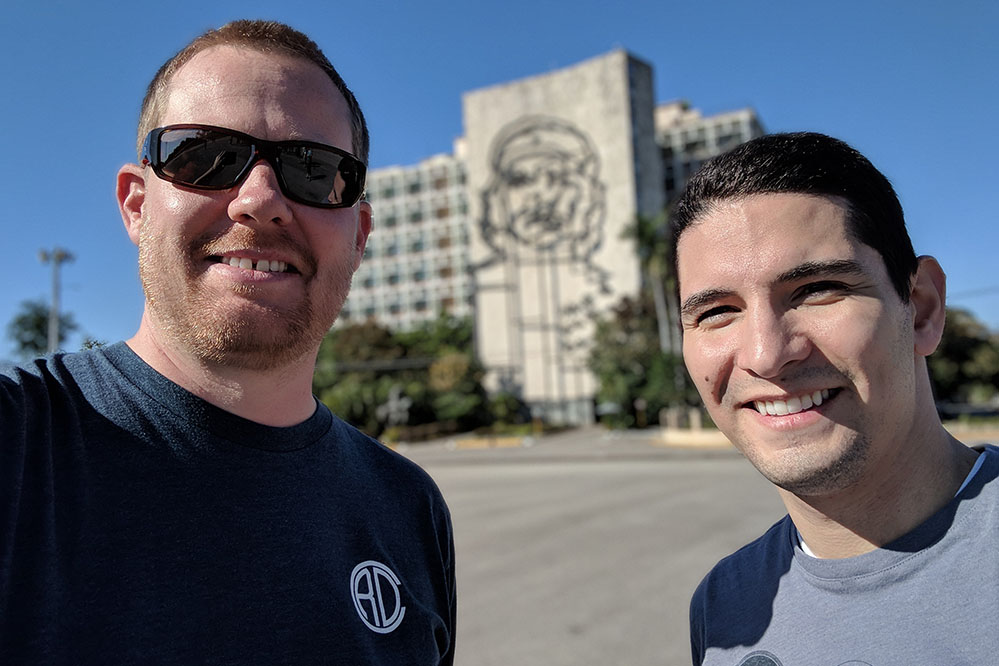