Can A Good Puff Rival A Good Perfume? Cigars Get Popular For Valentine’s Day 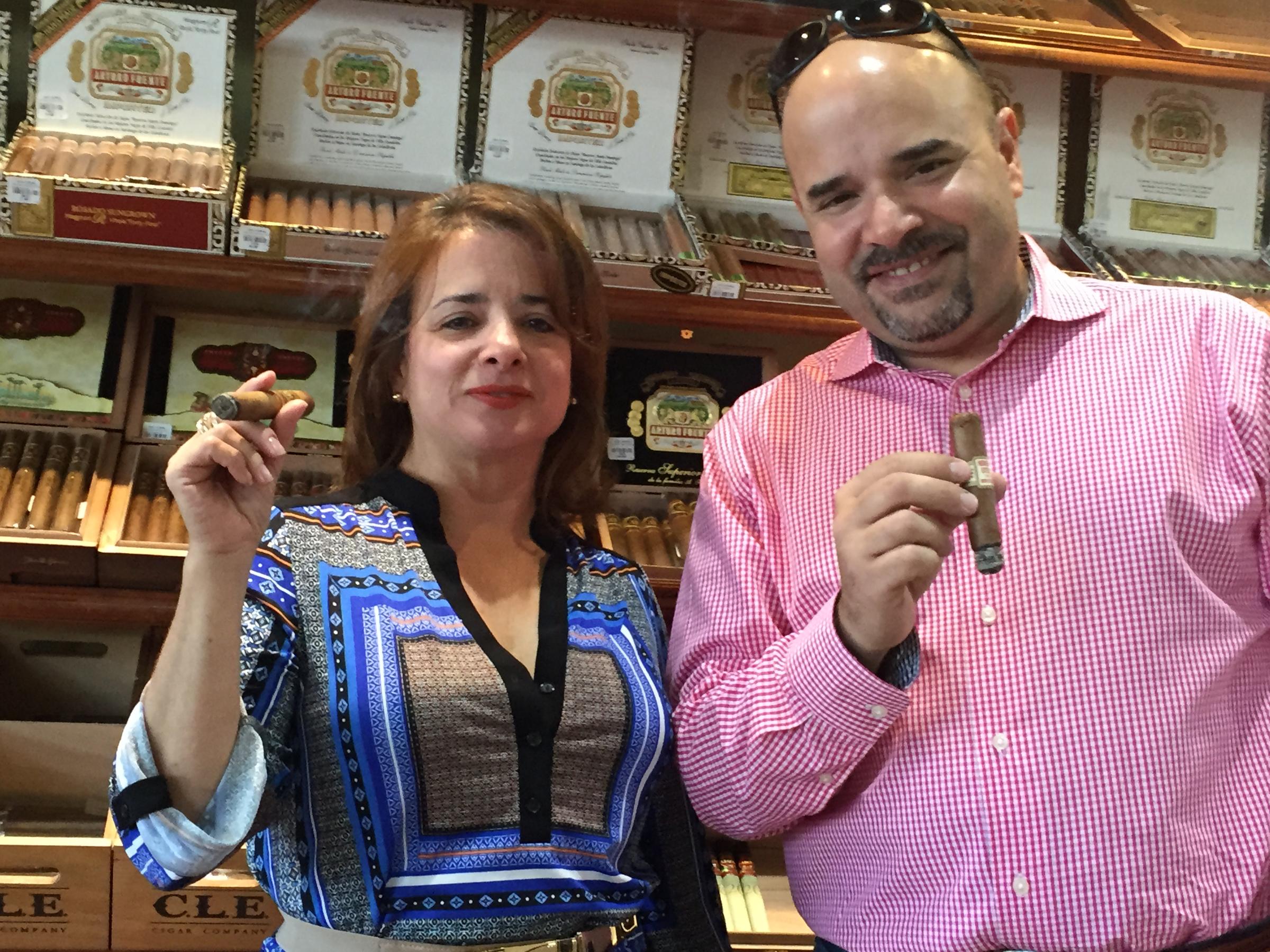 But here’s another Latin love link guys like Erik Calviño want you to consider: Caribbean cigars.

“Cigars have always exhibited elegance and luxury,” says Calviño, publisher of Cigar Snob magazine in Miami. “Sometimes women want to give that to their men. I mean, I don’t want chocolates. I’ll give you chocolates, y’know? Give me cigars.”

Calviño’s on to something. A good puff can be as special to men – or increasingly, women – as a good perfume is to ladies. Women’s lifestyle sites like SheKnows.com rank cigars among the top 10 Valentine’s gifts for men – especially in South Florida, one of America’s cigar capitals.

The trick is knowing what to buy. So to help women – or anyone who wants to give stoagies to a sweetheart – I meet Calviño at one of his favorite cigar shops, Sabor Havana in Doral.

Calviño was born in Cuba – and cigars are in his DNA.

“On my mother’s side they were tobacco growers,” Calviño tells me as we check out shelf after shelf of neatly boxed cigars looking like leather book spines in a library.

“The aroma of a cigar reminded me of my grandfather who had recently passed. That’s when I really started to fall in love with it. Smoke ‘em and think of him.”

We’re joined by Calviño’s sister, Jamilet – who was also born in Cuba and is also a cigar expert.

“Women text me, call me, even Facebook message me, asking me where should they buy cigars, if I can recommend them a good cigar,” says Jamilet. “They don’t know the difference between a Connecticut, a maduro.”

Then again, neither do a lot of men. (A Connecticut refers to a softer, lighter colored cigar. A maduro is usually darker and stronger.)

What Jamilet and her brother can’t recommend are Cuban cigars, which are still illegal to import commercially into the U.S. But Cubans are still the gold standard – and novice cigar buyers should understand why: They’re made with the best tobacco and tobacco rolling methods.

“It’s  like wine,” says Erik. “What makes Napa Valley Napa Valley? In Cuba, it’s volcanic soil. Then they use a method called entubado where they roll each filler tobacco individually, and that gives you this perfect combustion.”

So which Caribbean countries come closest to reaching that Cuban bar? Erik and Jamilet agree: Nicaragua. Honduras. The Dominican Republic.

“Some of the cigars coming out of Nicaragua are just amazing,” says Erik, “at an amazing value.”

Among their favorites are Herrera Estelís, for under $10 apiece. (Erik’s smoking one as we speak.) And as Jamilet describes its flavors, you can see why more women are thinking about cigars a bit the way they sip Cabernet.

“Peppery, spicy. And a little bit of sweetness.”

“A beautiful, box-pressed cigar,” says Erik. “This was our cigar of the year two years ago.”

Next door to Nicaragua is Honduras – which is a player because its cigar makers were crafty.

“They bought seeds that were smuggled out of Cuba – the original corojo,” Erik says. “It’s like the rock star leaf in Cuba at one time. In Honduras, we’re big fans of Camacho. Their Ecuador is a creamy, smooth cigar with that earthy core.”

Then it’s across the Caribbean to the Dominican Republic. Two names to remember there:

“Fuente and Davidoff,” Erik says. “Davidoff is sort of the Rolls Royce, if you will.”

Still, Fuente is one of the world’s best known cigar brands. The Calviños home in on the Fuente Don Carlos – and Jamilet and I light up a couple.

It’s an enjoyable, medium-bodied smoke. Jamilet appreciates it better than I do.

“The aroma,” she says. “And some of the nutty stuff too I like.”

I’ll take her word about the nutty flavor. But Jamilet’s refined sense is a reminder that women today are better cigar buyers because often they too are cigar smokers. Any night in Miami, go to bars like Casa de Montecristo in Brickell and you’ll find ladies puffing stoagies like British lords.

Or go to the Neptune cigar superstores in Miami and Fort Lauderdale – owned (with her husband) by a woman, Dominican Republic native Luz Normand. Valentine’s Day is now one of her busiest times.

“Increasingly, women come in the store and we have to advise them,” says Normand. “It’s romantic to give a guy something he enjoys.”

Or better yet, something couples can savor together.

“A lot of women say, ‘Do you have something to recommend for me?’” says Normand. “They come out with a cigar for themselves, and they’ll enjoy it with their loved ones.”

Maybe with some wine and chocolates. After all, those are still OK for Valentine’s Day, too.

(WLRN does not endorse the consumption of tobacco products.)