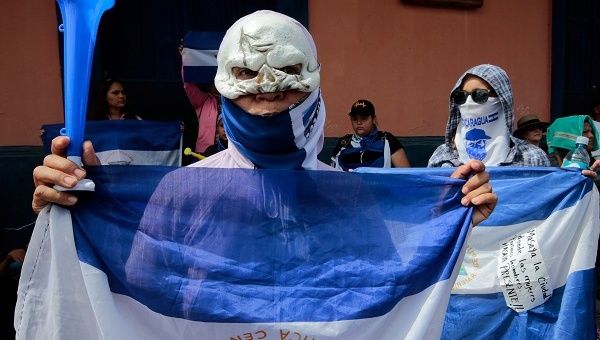 Camilo Mejía wrote an open letter condemning the Amnesty report for being biased and actually contributing to the chaos and violence.

August 28 (teleSUR) Western media have described the unrest and violence in Nicaragua as a ‘campaign of terror’ by government police and paramilitary. This has also been asserted by large non-governmental organizations (NGOs). In May, for example, Amnesty International issued a report titled ‘Shoot to Kill: Nicaragua’s Strategy to Repress Protest.’

A Miami Herald op-ed summarized: “It’s not like there’s any confusion over who’s to blame for the recent killings amid Nicaragua’s political violence. Virtually all human rights groups agree that Ortega’s police-backed paramilitary goons are the culprits.”

Much less publicized, other analysts have challenged these assertions. They claim the situation is being distorted and the reality is very different. For example, Camilo Mejía wrote an open letter condemning the Amnesty report for being biased and actually contributing to the chaos and violence.

Veterans for Peace (VFP) quickly agreed to co-sponsor events with Camilo in San Francisco and Oakland. Veterans for Peace also has a long history with Nicaragua, having been founded partially in response to U.S. aggression in Central America. VFP members protested against U.S. shipments to the Nicaraguan Contras. VFP member Brian Willson had both legs cut off when a train carrying weapons destined for Central America ran over him. The current VFP president, Gerry Condon, was at that protest and helped stop the blood gushing from Willson’s severed legs. Brian Willson lives in Nicaragua today.

Camilo Mejía was born in Nicaragua, the son of famous musician Carlos Mejía Godoy. His mother was a staunch Sandinista activist but separated from the father soon after his birth. She brought Camilo to the United States as a single mother in 1994, four years after the Sandinista electoral defeat. Living in Florida, Camilo struggled to make ends meet and joined the U.S. Army to pay for college. Just a few months before completing his service, Camilo was ordered into the 2003 invasion of Iraq. After serving one tour of war duty, he refused to return and was imprisoned for nine months.

Camilo was honored as a ‘Prisoner of Conscience’ by Amnesty International. Thus Camilo’s criticism of the Amnesty report on Nicaragua has special significance. Camilo is Nicaraguan, a member of Veterans for Peace, and a hero to both VFP and Amnesty. He is also the author of the compelling autobiography, ‘Road From Ar Ramadi.’

Camilo’s visit to speak on Nicaragua also prompted a reaction from some Americans who had once supported the Sandinistas but now support the opposition. They campaigned to have their viewpoint presented at our events. TFA and VFP organizers thought there was no need to include the opposition voice, because their characterization of the conflict is widespread. However, Camilo wanted to be transparent and not exclude the opposition. He thought that if we allowed an opposition supporter to speak briefly, they were more likely to listen to his analysis and he could directly address their concerns.

At the San Francisco event, protesters arrived early in front of the War Memorial Veterans Building. When the event started, protesters flooded into the venue. As promised, an opposition supporter was invited to speak briefly.The audience of about 120 was split between those who wanted to hear Camilo and those who came to protest. Camilo’s talk was repeatedly interrupted and police arrived to prevent violence. Camilo asked what kind of “democracy” was this they claimed to want for Nicaragua when they would not listen or allow him to speak here in San Francisco?

Camilo showed two short video clips. The first video showed opposition activists torturing a Sandinista supporter under the oversight of a Catholic priest and the remains of a Sandinista burned alive.

A second video showed a statement from an American who has lived in Nicaragua for many years. He described how gangs had invaded his town, set up road blocks, intimidated and abused local civilians. He described the joy of the community when the roadblocks were removed and masked ‘protesters’ departed.

The audience got increasingly disruptive during the question period. A prominent Nicaraguan opposition supporter came forward, offering to quiet the disrupters. After receiving the microphone from Camilo, she did the opposite.The disruptions escalated and the event had to be ended early. The protesters had completed their mission: they had prevented Camilo from being able to present his perspective.

Organizers from TFA and Veterans for Peace decided the event in Oakland needed to be handled differently. Members of Veterans for Peace, including Chapter President Paul Cox and others, prevented the protesters from entering. Ultimately the venue was packed with interested listeners. The anti-Ortega crowd protested on the sidewalk and street but were not able to disrupt the event.

With the loud opposition outside, Camilo was introduced by VFP President Gerry Condon. He gave a clear and concise history of key events in Nicaraguan political history, including:

* Nicaragua was connected to the gold rush in California in the mid-1800s. That is when the idea of a trans-oceanic passage through Nicaragua was born.

* When Cesar Sandino launched guerrilla war in the 1920s and ’30s, there were two priorities: advancing the working class and anti-imperialism.

* The Frente Sandinista which carried out the 1979 revolution had nine commanders: three from each of three factions.

* After the Sandinistas lost the 1990 election, splits emerged and ultimately Sergio Ramirez formed the Movimiento Renovador Sandinista (MRS). The more affluent members plus intellectuals, writers and musicians gravitated toward it. But though they were well connected to Western solidarity activists, they had no popular platform nor base. They did poorly in elections and moved toward neoliberal policies and the NGO world.

* Since taking power in 2007, Daniel Ortega and Sandinistas have improved living conditions for the poor with free healthcare, free education and better economic policies. Nicaragua now supplies 80 to 90 percent of its own food.

* Up until April, Nicaragua was vastly safer than neighboring countries. Their ‘community policing’ is considered a model.

* There has been much misinformation about the proposed changes in social security which sparked the protests in April. To stabilize the social security funding, the IMF wanted to implement an austerity plan which would have doubled the work requirements and raised the qualification age from 60 to 65. The Sandinista proposal was much more progressive, requiring wealthy individuals and businesses to pay much more with minor changes for others.

* The death count has been manipulated. Some deaths are counted twice; people who were said to be dead have turned up alive; dead Sandinista supporters have been counted as protesters. The first deaths on April 19 were one student, one police officer and one bystander killed by sniper fire. Camilo asks: Was this done by the government or by outside forces?

* The National Endowment for Democracy and other U.S. agencies have trained students and others in using social media, video and symbols to stir up dissent and destabilize Nicaragua.

At the Oakland event, Camilo showed a torture video which demonstrates opposition violence. He also showed video of the huge July 19 celebration of the Sandinista revolution anniversary. His talk was followed by many questions, including from opposition supporters.

At times during the event, there was tension and concern about violence from the protesters outside. Some Nicaraguan families were afraid for their safety. After the event, they had to be escorted with protection to their cars. The car of one Nicaraguan family was besieged by the anti-Ortega crowd. Camilo and his young daughter had to be quickly taken away amid shouts and waving placards.

Ultimately, Camilo’s visit accomplished the goal. Media interviews in Spanish and English reached many thousands. In these and the public presentations, he brought information and analysis which has been largely censored or ignored in coverage of Nicaragua.

Camilo believes Nicaragua has temporarily defeated a ‘soft coup’ attempt but the danger is not over. The opposition forces internally and internationally are still there.

Rick Sterling is an investigative journalist and current board president of Task Force on the Americas.