Bronx Museum of the Arts Plans Art Exchange With Cuba 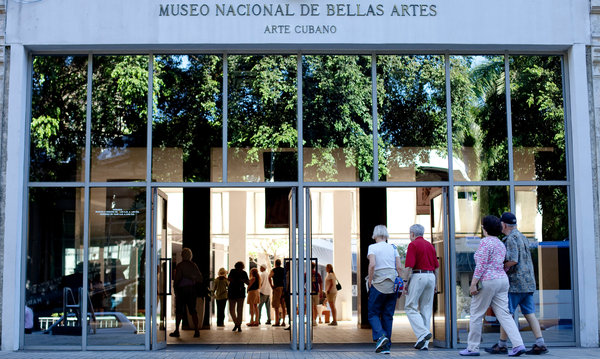 The National Museum of Fine Arts in Havana, which will host over 80 works from Bronx Museum of the Arts from May 21 through Aug. 16. Credit Eliana Aponte for The New York Times

The Bronx Museum of the Arts and the National Museum of Fine Arts in Cuba announced Wednesday that a major exchange of works from their collections would take place this year and next in the most sweeping collaboration between the two countries’ museums in more than 50 years.

The arrangement is the fruit of curatorial negotiations that began long before the recent thaw in diplomatic relations, said Holly Block, the Bronx Museum’s executive director, who has traveled to Cuba and followed the work of artists there for two decades.

Over 80 works of art dating from the 1960s to the present will travel from the Bronx’s permanent collection for display at the National Museum from May 21 through Aug. 16, coinciding with the 12th Havana Biennial. In the fall of 2016, more than 100 works from the National Museum’s collection will come to the Bronx Museum, which has long collected and championed work by Cubans and Cuban-Americans as well as other art from Latin America and from Africa and Asia.

“There are, of course, huge differences between the Bronx and Havana, but there are also a lot of similarities,” Ms. Block said. “The idea is to reinforce the fact that the National Museum is a very local museum, which is what we are, too.”

Large portions of Havana’s collection have traveled before — most notably to the Montreal Museum of Fine Arts in 2008 for the show “¡Cuba! Art and History From 1868 to Today.” Since the United States imposed an embargo on trade between the two countries in 1960, many exhibitions of Cuban art have been organized here, and pieces from private American collections have gone on view in Cuba. But there has never been an exchange of this scale or ambition between the two museums. “It makes a lot of sense for us,” said Corina Matamoros, a curator of contemporary art at the National Museum in Havana. “Our museums have a common mission and a common vision about contemporary art, created in specific community contexts.”

The exhibitions this year and next will be jointly titled “Wild Noise,” a reference to the chaotic beauty of urban spaces based on a passage in a Victor Hugo poem about “the wild noise where infinity begins.” Ms. Matamoros, who spoke in Spanish through a translator, said: “I want to be absolutely clear that because we’ve been so isolated for the last 50 years, I really don’t think the United States knows much at all about Cuban art. I think this art, which spans from the ’60s until now, is all going to be a revelation.” She mentioned artists like Antonia Eiríz Vázquez, a painter of powerfully dark Goya-like visions who died in 1995; Raúl Martínez, a Pop-inflected painter and graphic designer, who also died in 1995; and Alfredo Sosabravo, whose vividly colored figurative painting often combines whimsy with a social bite.

The collaboration is another feather in the cap of the relatively tiny Bronx Museum, which in 2013 commissioned the art for the United States pavilion at the Venice Biennale, a complex installation by Sarah Sze.

Ms. Block, the author of the 2001 book “Art Cuba: The New Generation,” traveled to Cuba in December to talk to curators there about the project and arrived serendipitously in Havana on the day that President Obama ordered the restoration of full diplomatic relations. “I didn’t know it had happened,” she said, “but you could almost feel it in the streets. It’s a pretty amazing moment for this kind of collaboration to be happening.”

Past exhibitions at the Bronx Museum that have featured Cuban art include “Revolution Not Televised” in 2012, with works by contemporary Cuban artists in its permanent collection; the first solo American museum exhibition of the work of Carlos Garaicoa, “The Ruins, the Utopia,” in 2001; and “The Nearest Edge of the World: Art and Cuba Now” in 1991, featuring the work of nine contemporary Cuban artists. The museum’s collection includes works by Cuban artists like Ana Mendieta, Wilfredo Prieto, Sandra Ramos, José Ángel Toirac and Tania Bruguera, a performance artist who was repeatedly arrested last month during protests in Havana demanding the release of political detainees.

The holdings of the National Museum of Fine Arts, founded in 1913, are now divided between two buildings in the capital — one dedicated to Cuban art and the other to art from around the world dating from the classical period to the present. Ms. Block said that the diplomatic thaw would not only provide a momentous backdrop for the exchange but also open the possibility that moving artwork between the countries will become far easier. “For private collectors, it hasn’t been so tough in recent years to move works, but the red tape between governments for transfers between institutions has been very difficult,” she said.

Moving people hasn’t been much easier. Ms. Matamoros said that after years of being able to travel to the United States for art projects, she was denied a visa last year by Cuban officials. After a perfunctory two-minute interview, she said, she was given a form letter that said her application had been denied because of a suspicion that she planned to emigrate. “I very much hope that won’t happen next time,” she said.