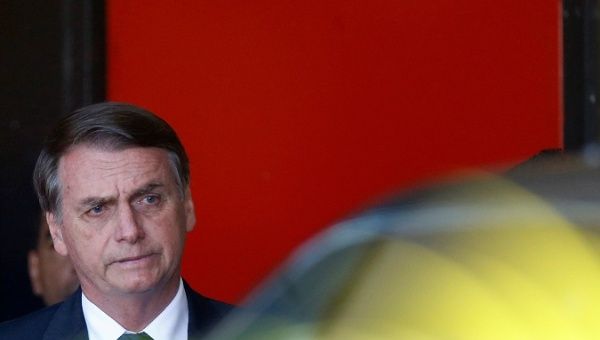 The United States is counting on Brazil under Bolsonaro to be a strategic ally.

Dec 18 (teleSUR) Brazil’s far-right President-elect Jair Bolsonaro said on Tuesday that he would take all action “within the rule of law and democracy” to oppose the governments of Venezuela and Cuba.

Bolsonaro, who takes power Jan. 1, is a fervent anti-communist who has praised his country’s 1964-1985 military regime. He frequently targets Venezuela and Cuba for verbal attacks, a drastic change from Brazil’s governments under the leftist Workers Party that ruled from 2003 to 2016 and had warm relations with those governments.

Brazil’s incoming president did not provide any details during the Facebook live video when he made his most recent comments on Venezuela and Cuba.

The United States is counting on Brazil under Bolsonaro to be a strategic ally.

Bolton said Bolsonaro’s election was a “historic opportunity” for Brazil and the United States to work together on security, economics and other issues.

Bolton hailed Bolsonaro’s election as a positive sign that Brazil would support U.S. pressure on Venezuela’s left-wing government of Nicolas Maduro, which he describes as part of “the troika of tyranny” in the Americas, alongside Cuba and Nicaragua.