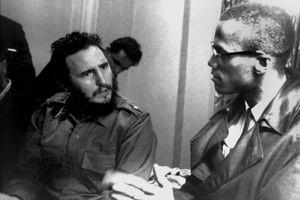 The U.S. movement rejected right-wing rhetoric against the Cuban leader as they listed the lessons they learned from his struggle.

Black Lives Matter, the U.S. anti-police brutality group, mourned the death of former Cuban President and revolutionary leader Fidel Castro as it issued a statement reflecting on his life and how the movement could learn from his life and struggle against imperialism.

“We are feeling many things as we awaken to a world without Fidel Castro. There is an overwhelming sense of loss, complicated by fear and anxiety,” the group said Sunday as the world reacts to the death of the larger-than-life leader.

The group further pushed back against the anti-Fidel rhetoric in the West and the mainstream media coming “to the defense of El Comandante.”

The group stressed that in their own struggle for freedom and justice, they will be using “the lessons that we take from Fidel” to realize their own goals.

“From Fidel, we know that revolution is sparked by an idea, by radical imaginings, which sometimes take root first among just a few dozen people coming together in the mountains. It can be a tattered group of meager resources, like in Sierra Maestro in 1956 or St. Elmo Village in 2013.”

The Black Lives Matter movement was born out of a viral hashtag of the same name following a jury’s acquittal of George Zimmerman for the 2012 shooting death of Trayvon Martin.

It has since evolved into a movement against police killings of Black people particularly following the high-profile cases of Eric Garner, Michael Brown and Freddie Gray, winning support among progressive and leftist voices in the U.S. and abroad.

The group highlighted that Fidel succeeded in his revolution because he managed to win “the hearts and minds of the people,” while continually adopting and reshaping the struggle to fit with what the grassroots wanted.

“No single revolutionary ever wins or even begins the revolution. The revolution begins only when the whole is fully bought in and committed to it. And it is never over.”

Another lesson the group is learning from the Cuban leader is how his revolution did not stop at the borders of Cuba. “Revolution transcends borders; the freedom of oppressed people and people of color is all bound up together wherever we are,” Black Lives Matter said in their statement.

“In Cuba, South Africa, Palestine, Angola, Tanzania, Mozambique, Grenada, Venezuela, Haiti, African America, and North Dakota. We must not only root for each other but invest in each other’s struggles, lending our voices, bodies, and resources to liberation efforts which may seem distant from the immediacy of our daily existence.”

The group concluded with being thankful for Fidel for his support for Black movements and figures in the U.S. at a time when many in the world abandoned them. “A final lesson is that to be a revolutionary, you must strive to live in integrity,” the group said.

“As a Black network committed to transformation, we are particularly grateful to Fidel for holding Mama Assata Shakur, who continues to inspire us.”

The group went on to highlight the revolutionary’s support for struggles of people of color through the decades and his unwavering commitment to his ideals since the early stages of his Marxist revolution in the 1950s.

“As Fidel ascends to the realm of the ancestors, we summon his guidance, strength, and power as we recommit ourselves to the struggle for universal freedom. Fidel Vive!”