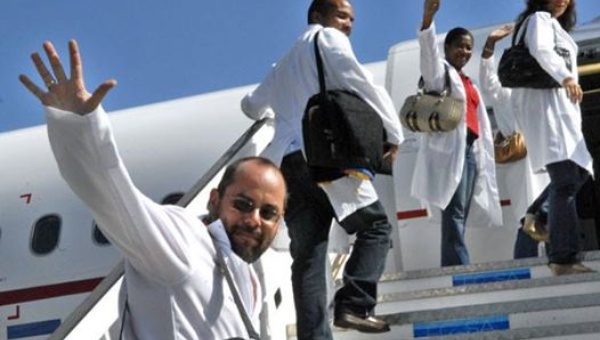 In what a New York Times editorial called “Cuba’s Impressive Role on Ebola” [Oct. 19], hundreds of Cuban doctors and nurses are being dispatched to West Africa to battle Ebola, train medical personnel, and create isolation and treatment centers.

The Cubans are playing “the most robust role” of any country in battling the Ebola plague, which has erupted virulently because of a broad failure, according to the Times, “to produce medicines and vaccines for diseases that afflict poor countries.”

The U.S. has 550 military personnel in Africa on counterterrorism missions while over 5,000 Africans have succumbed to the non-military threat of Ebola. Cuba is taking action in part because Ebola, unchecked, will spread to the Caribbean, but also out a consistent sense of humanitarian duty which Washington fails to comprehend.

Even the Times felt obliged to claim that the Cuban medical initiative is meant to shore up its “beleaguered international standing.” What are the esteemed editors talking about? Cuba’s reputation is among the best in the world, despite a mixed record on human rights, especially because of its highly-regarded medical and education programs.

The UN General Assembly votes 187-2 in favor of lifting the 50-year old U.S. blockade of the island. Cuba has rushed medical personnel to many countries before, including hundreds to Haiti during its 2010 cholera epidemic. 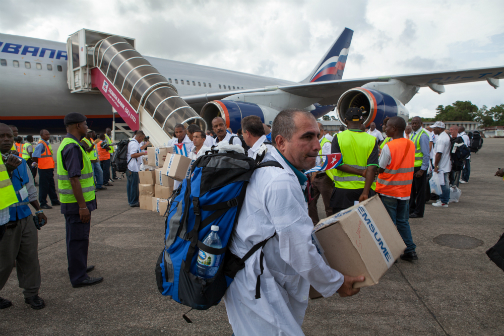 Meanwhile in the U.S., profit-driven drug companies “have resisted spending the enormous sums needed to develop products useful mostly to countries with little ability to pay” — the Times adds. But in a globalized world where infections can spread virally, the U.S. is geared to battle terrorism far more than plague.

In an October 19 statement from Havana titled “Duty Calls,” Fidel Castro wrote that “the medical professionals who travel to any location whatsoever to save lives, even at the risk of losing their own, provide the greatest example of solidarity a human being can offer, above all when no material interest whatsoever exists as a motivation.”

The Cuban leader was careful to note that while Cuba is “happy to cooperate” with the U.S. it would not be “in search of peace between these two states which have been adversaries for so many years,” but for a “world peace” that should be attempted.

Clearly, Cuba’s humanitarian missions are meant to cultivate diplomatic support. But men and women do not risk their lives in plague zones in order to improve a diplomatic scorecard. They do so out of honor, patriotism, and a sympathy with the poor of the earth. It would be a counterproductive mistake for anyone in the White House to believe that the Cuban action is designed to curry favor or extract a concession from Washington.

The U.S. can try to quarantine Cuba while Ebola spreads or the U.S. can, to quote President Obama, “lead by following” the Cubans in the fight. The U.S. can provide its treatment center in Monrovia to Cuban personnel, send financial and medical aid, and make American aircraft available for emergency airlifts of infected Cuban doctors or nurses back to protected facilities. In a state of emergency, the White House can even restore diplomatic ties without requiring Congressional approval.