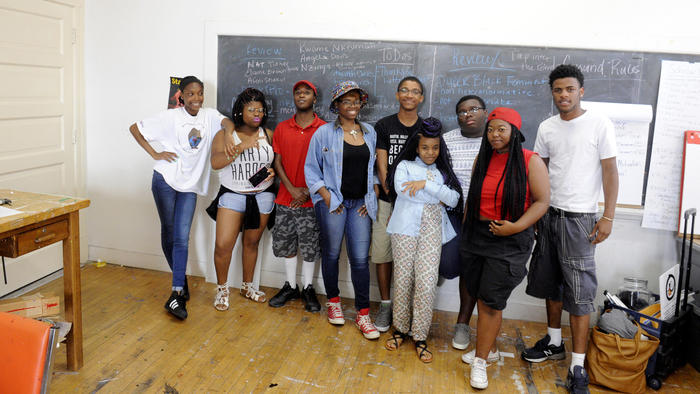 One student is looking forward to rapping in a Cuban freestyle, and another mostly wants to observe Cuban life.

But 17-year-old Dom Carter can’t wait to go swimming there. He thinks it will be “amazing to be able to swim in water that I can see through.”

Dom, a rising senior at Baltimore’s Frederick Douglass High School, and 12 other area students leave Saturday for a two-week expedition to Cuba. The trip was organized by two local groups, the African Diaspora Alliance and Muse 360 Arts.

Eight of the students are from Frederick Douglass High School, and five others are in Muse, a Baltimore-based arts education program.

Moriah Ray and Jasmine Hall, who founded the African alliance last year, studied in Cuba while they were in college. They said they decided to organize a Cuba trip for high school and other students to help them understand the role played by Africans in the country’s development.

The two women especially wanted to reach students who otherwise might not get an opportunity to study abroad.

On their trip, the students will meet Cuban filmmakers, poets and artists, and study the history and culture of the country. A large focus of the program is on the African diaspora, which is the spread of the African population across the world through slavery.

Ray said when students began meeting with the alliance several months ago, some did not know Cuba existed, let alone the country’s ties to Africa.

“It’s recontextualizing and changing the way they understand the narrative of the world through an African lens,” Hall said.

While the trip may seem like a variation of summer school, Dom said there’s no other way he would want to spend his summer vacation.

It wasn’t easy for the group to get to this point. They’ve held a series of fundraising activities, including dinners, a silent auction and even a film festival to help pay for the trip, which costs about $3,000 a person. A mix of grants and community donations is covering the rest, Hall said.

Some of the students have regularly attended meetings of the African alliance, where they talk about African history, black nationalism and other subjects. Sharayna Christmas, executive director of the Muse group, heard about Hall’s and Ray’s plans for a Cuba trip and decided to become a co-sponsor.

Malcolm Alexander of Washington joined the Muse program when he was 11. At first, he didn’t talk, take notes or do homework, Christmas said.

Now, at age 20, Alexander is studying at the University of the District of Columbia Community College. He said he has learned to think more about his life purpose and desire to make music and art for society’s benefit. “What do I want to give to the youth?” he said.

Alexander previously traveled to the Dominican Republic with Muse, but other Cuba-bound students will be making their first trip outside the United States.

“We’re trying to create a safe space here first, where they can trust us to travel together abroad,” Christmas said. “It’s a challenge and a process for students, especially ones that aren’t used to traveling.”

Shakura Shird, 18, said the African alliance has positively affected her perception of herself and black culture. She’s been able to love herself more as a black woman, she said. While abroad, she hopes to take in everyday Cuban life.