March 2, BIRMINGHAM (Reuters) – Juan Miguel Echevarria won a captivating long jump at the world indoor championships on Friday that stirred memories of epic past contests as the Cuban refused to buckle under a fierce challenge from outdoor champion Luvo Manyonga.

By rights, the 19-year-old should have rolled over once his leap of 8.28 metres was trumped by the South African who, after two huge no jumps, scraped into the final stages with 8.33.

But instead of accepting the seemingly inevitable, Echevarria responded by first jumping 8.36 to move back into the lead and then, after Manyonga responded with 8.44, bettered what was already a personal best to win with a fifth jump of 8.46.

It was a world best this year and a UK all-comers record. By chance it equalled Mike Powell’s best indoor mark because this was a contest that resembled the great jousts between the American and his compatriot Carl Lewis. 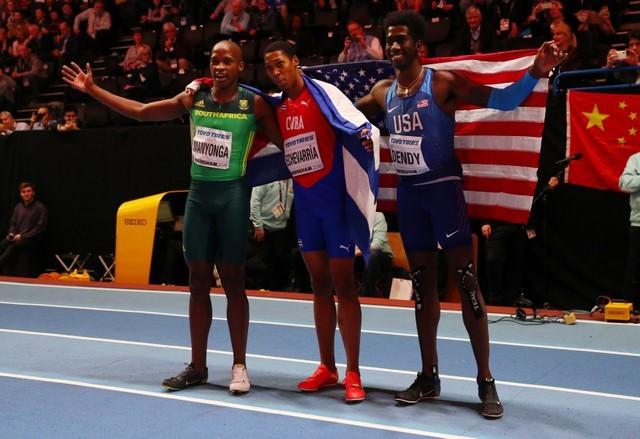 The bronze went to defending champion Marquis Dendy, who leapt 8.42 to complete a full set of personal bests by the medallists.

Fittingly, he received his medal from Alberto Juantorena, Cuba’s Olympic gold medallist in the 400 and 800 metres in 1976.

“I think I’m in the peak of my career,” said Echevarria.“I’m feeling very physically strong. Birmingham has been great to me and the atmosphere has been fantastic and I’m really looking forward to what 2018 holds.”

There will almost certainly be more to come from Echevarria, with former Olympic champion Greg Rutherford predicting that a new star had been born.

“At 19, that was something special,” said Rutherford, who was commentating for the BBC after missing the event through injury.

“Generally, jumpers put on 20 or 30cms outside so we should see a great summer. It was a great showcase for the sport.”

Echevarria had announced his intention to compete for medals in Birmingham by posting 8.34 in finishing behind Manyonga in Metz earlier this month, following up with a solid 8.20 last time out.

There was always the suspicion that even that might not be enough against Manyonga, who threatened to jump through the end of the pit on more than one occasion.

Looking unflustered, Manyonga knew that as an athlete, and as a man who has battled drug addiction, greater challenges had been conquered and the result was in doubt right to the finale, when Manyonga registered his fourth no jump.

Predictably, the South African departed with a smile and a sense of perspective.“I tried to get the gold but I did well to get a personal best,” he said.