At the forefront of the sciences in Cuba 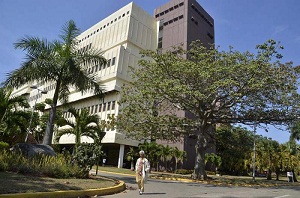 FROM the 1980s onward, Havana residents witnessed the building of various scientific facilities to the west of the city, including the Center for Genetic Engineering and Biotechnology (CIGB), founded on July 1, 1986, equipped with state-of-the-art technology, modern productive capacities, and specialized personnel.

Biotechnology is one of the novel fields of the day, combining methods and techniques in the study of the biological relationships of living things, especially unicellular organisms, based on the fusion of microbiology, chemical engineering and biochemistry, and providing insight into microbial mechanics.

While Hungarian engineer Károly Ereki coined the term “biotechnology” in 1919, during the second half of the twentieth century, more extensive research to solve problems in agriculture, pharmacy, food science, the environmental, power generation (biofuels) and medicine, began.

Precisely to substitute pharmaceutical imports and improve the quality of life of the population, in the late 1980s, the Cuban government, and in particular leader Fidel Castro, took an interest in these studies and formed a group of experts to seek further information in the United States and Finland, mainly. Scientist and physician Dr. Eduardo Pentón Arias, speaking to Granma International, explained that in 1981 a group of scientists living in the Havana suburb of Cubanacan (occupying residences abandoned by the bourgeoisie following the triumph of the Revolution), came together and later created the Center for Biological Research.

Zamora These researchers studied interferons, proteins naturally produced by the immune system of most animals as a response to pathogens, which can be harvested from blood. With these, they produced a prototype drug, effective in treating cancer and infections. The head researcher explained that obtaining this first Cuban product helped combat epidemics in the country such as dengue hemorrhagic fever and intense viral conjunctivitis, raising the need to increase production of the drug, while the possibility of obtaining molecules through in vitro recombination was studied.

This required new facilities, specialized laboratories, cutting edge technology and dedicated scientific staff, for which the CIGB was built to the west of the capital. The institution acquired a dynamism which allowed for the highest level research, development, production and marketing of biological products, obtained through modern biotechnology methods, the scientist noted. CIGB products have been evaluated in various countries, which have authorized their commercial registration, and have also received endorsements from international organizations such as the World Health Organization and the Pan American Health Organization, verifying their quality.

Since its inception and until about 2008, this scientific entity was subordinated to the Council of State. It was then transferred to the Ministry of Science, Technology and Environment and is currently among the 32 enterprises of the BioCubaFarma Group, responsible for producing 592 of the 888 required basic medicines in the country. The CIGB has a workforce of almost 1,600, produces over 70 products of its own invention, and is currently undertaking more than 50 research and development projects, covering human and veterinary vaccines, recombinant proteins for therapeutic use, synthetic peptides, monoclonal antibodies, and diagnostic systems.

The Center also undertakes projects involving proteomics and bioinformatics, and plant biotechnology, including functional foods and aquaculture. Today, its leading product is Heberprot-P, a unique drug for the treatment of diabetic foot ulcers, reducing the risk of amputations. The Center also produces important medicines for the treatment of 26 diseases including hepatitis B and C, meningitis, leukemia, myeloma, melanoma, skin carcinomas, cutaneous lymphomas, kidney and bladder cancer, infantile hemangiomas, neutropenia and anemia. “The scientist puts the latest technology at the service of society,” Pentón Arias stated, adding “first with the commitment to discover elements of nature, later studying their application, in order to then demonstrate their productive effectiveness.

This is very rewarding. One enters the world of science and it becomes an addiction, where time is scarce and the work schedule is devoted to this activity.” Young biochemistry graduate Brizaida Oliva Argüelles agreed, “It’s very appealing to conduct experiments, look at the inside of cells, examine DNA, RNA, lipids and proteins. One always has the desire to dig deeper. When the first results are obtained, we seek others, and coming to work becomes a passion.” Argüelles, who has been linked to the Center since her undergraduate studies, has worked on new pharmaceuticals to discover vaccines against meningitis and is currently investigating synthetic peptides for cancer therapies, a topic she addressed in her master’s thesis.

She assures, “We have the resources needed for research, our laboratories are well equipped, and we undertake constant scientific exchanges among researchers, even those from abroad.” Meanwhile, her colleague Dr. Manuel Raíces Pérez-Castañeda highlighted that the CIGB responds to the various programs implemented by the Ministry of Public Health, focused on maternal and infant care, the elderly, oncology, chronic non-communicable diseases, cardiovascular diseases, diagnosis of congenital diseases and others.

He explained that from 1981-1990, the Center produced three products, while in the next decade it produced 18, and since 2001 the figure has risen to over 40, as such, “This has been a growth industry, generating net income for the country and able to serve large markets abroad.” In addition, the scientist emphasized that the Center is open to alliances with international institutions, aimed at accelerating the progress and commercial implementation of projects, and entering more sophisticated markets. The efforts of the CIGB today benefit all Cubans alike, and the results have meant a leap toward stable and sustained development for Cuban socialism, the result of a robust political will to solve the problems facing human beings.