Another U.S.-Cuba first: Women lead both sides in normalization talks 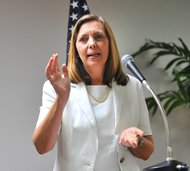 WASHINGTON — The first steps toward normalization between the United States and Cuba are likely to be taken in heels.

Foreign policy analysts who monitor Cuba note that the talks in Havana this week, part of a thaw announced last month after more than 50 years of frozen relations, offer a prominent platform for two formidable women – the United States’ Roberta Jacobson and Cuba’s Josefina Vidal – who’ve used their expertise and determination to become trusted emissaries of their respective nations.

“That’s probably another first, too,” said Mark Entwistle, a Canadian diplomat-turned-consultant who served four years as Ottawa’s ambassador in Havana. 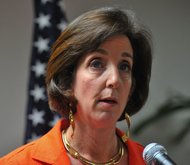 Jacobson oversees some 10,000 personnel in 30 countries as assistant secretary of state for the Western Hemisphere; she’s the first woman and first civil servant to hold the job. Her Cuban counterpart, Vidal, is regarded as a top “Americanologist” for the Castro government. She’s not only a Foreign Ministry standout in charge of the North America portfolio, but she also enjoys wider government influence as a member of the Central Committee of the Communist Party.

Cuba watchers are eager to see how a détente takes shape under two seasoned negotiators who’ve studied each other for years.

Lower-level U.S. and Cuban teams began previously scheduled migration talks in Havana on Wednesday. Jacobson, the highest-ranking U.S. diplomat to visit Cuba in more than three decades, is expected to meet with Vidal on Thursday and Friday for a first round of normalization talks.

“The great news is that they’re speaking and working each for their own presidents, so they’re bringing to the table the gravitas and authority of their respective heads of state,” said Julia Sweig, a scholar who’s written extensively on Cuba and has followed both women’s careers. “They’re a great match. They’re both very knowledgeable, very mindful of their countries’ national interests.”

Vidal is known as among the most astute of those students. During her time at the Cuban interest section in Washington – in the 1990s, before mutual restrictions on diplomats’ travel – Vidal crisscrossed the United States to stump for an updated U.S. policy toward Cuba. She made friends in Washington and in far-flung states and returned to become “among the very few women in foreign policy in Cuba,” Sweig said. She’s known for showing up on the tarmac in Havana to personally greet visiting congressional delegations.

“She’s a very, very, very smart and dialed-in individual who is also an incredibly hard worker,” Sweig said. “There’s very little she’s not on top of.”

Tom Shannon, a State Department counselor and former assistant secretary for the Western Hemisphere, has known and observed Vidal and Jacobson for years. He said Jacobson early in her career “was marked as special, someone with unusual talent and therefore worthy of promotion.” He described Vidal as Fidel and Raúl Castro’s trusted gatekeeper for the Americans – typically, he said, “we don’t get much beyond her.”

Shannon chuckled when asked about the matchup.

“This is going to be fascinating,” he said. “Two strong-willed women representing their countries, and determined to do that to the best of their abilities.”