Analyzed: Enemies of Democracy and the Venezuelan Elections

May 18 (teleSUR) It is often said – stated as fact in many media – that oil-rich Venezuela has historically been one of South America’s wealthiest countries, but few dare to mention that prior to 1998 it was also among the most unequal, with rampant urban poverty that was only worsened by International Monetary Fund (IMF) reforms. 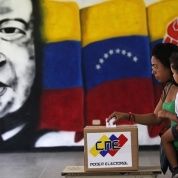 When Hugo Chavez assumed the presidency, the state oil company was restructured so that the nation’s vast wealth could be used to benefit the Venezuelan people. Under Chavez, huge strides were made to invest in education, healthcare and housing projects.

But not everyone was pleased. The United States, along with the Venezuelan classes who had long enriched themselves with oil rents on the backs of the majority, made it clear they would not tolerate the radical democracy of Chavismo.

The strategy of the North American empire and its local allies follows a pattern. To destroy a socialist, oil-rich country, one must lower oil prices, apply sanctions, ally with internal reactionary forces, destroy the economy and – when the moment is right – stage a coup.

This strategy has been successful before, most famously in Salvador Allende’s Chile and Mohammad Mossedegh’s Iran, both of whom nationalized key resources before being removed by economic siege tactics and a subsequent military coup fomented by the U.S. Central Intelligence Agency (CIA)

It has been attempted in Venezuela, but to no avail.

Chavez was briefly removed in a coup in 2002, but was reinstated when mass working-class protests erupted in Caracas and, together with loyal arms of the military, were able to defeat the attempt.

Those who orchestrated the coup were later revealed to have had close links to U.S. officials in the Bush administration, having been reported by the Organization of American States (OAS) to have held “a number of meetings” with Bush’s Latin America policy adviser, Otto Reich, a right-wing Cuban American who served as U.S. ambassador to Caracas in 1986.

A decade and a half later, many of the same actors are once again salivating at the prospect of a Chile-style coup in South America’s most oil-rich country.

A combination of falling oil prices, increasing sanctions, goods hoarding, and illegal currency exchanging that inflates the value of the Bolivar has resulted in a dire economic crisis that has harmed the Venezuelan people and weakened the Bolivarian government politically.

The government has made efforts to overcome the crisis by combating illegal currency exchange and bolstering social programs, such as the CLAP, to assuage the worst of the crisis’ effects on Venezuela’s working class.

In 2017, Venezuela’s right-wing and their international backers decided to leave behind peaceful, electoral politics and instead organized ‘guarimba’ protests in Caracas, destroying public buildings, assaulting and burning people alive for being Chavista, and using homemade firearms to attack security forces.

Internationally, the United States and regional allies repeatedly called for elections to be held immediately during this time.

“We call for the government of Venezuela… to hold elections as soon as possible,” the U.S. Department of State said on March 30, 2017.

One might assume that the United States would have been thrilled when Venezuela’s National Electoral Council (CNE) announced early elections, but instead the same U.S. Department of State that earlier had called for elections did an about-face to denounce the decision.

The statement failed to mention that negotiations had been terminated a day earlier by representatives of the opposition coalition Democratic Unity Roundtable (MUD), even though government representatives had faithfully worked to draft the compromises demanded.

As a response to the opposition’s claim that they wanted an electoral solution, a Democratic Coexistence Agreement drafted during the negotiations moved elections forward from December to April (they were later shifted to May), established international observers from the United Nations, and included a clause of mutual recognition between the opposition-controlled National Assembly that had been held in contempt due to electoral fraud, and the Constituent Assembly (ANC) that the opposition refused to recognize.

Both sides had high hopes for the negotiations, until the MUD leaders decided to withdraw from the agreement on February 7, and refused to participate in the same early elections for which they had previously pushed.

Nauert of the Department of State, along with most U.S. media, reported that the early elections had been called “unilaterally” and thus were illegitimate.

So opposed were the more radical sectors to electoral participation that when opposition leader Henri Falcon decided to break ranks and register as a candidate, he was repudiated by the MUD coalition. The claim was that Falcon had “legitimized” a “dictatorship” by putting himself forward as a candidate.

Falcon, however, disagreed. He argued that there “is no way” Maduro can win if the opposition unites behind a single candidate and encourages people to vote rather than abstain.

Indeed, Falcon has done well in polls, maintaining a strong second place as the elections approach. However, the MUD coalition’s call for an election boycott makes it difficult to predict how many on the opposition side will participate. The outcome could hinge on this.

US Policy: Military Coups Have Worked Well in the Past… Right?

Two days after the MUD coalition withdrew from elections and abandoned the path of “democratic coexistence,” U.S. Republican Senator Marco Rubio suggested that the United States was prepared to back a military coup in Venezuela.

“The world would support the Armed Forces in Venezuela if they decide to protect the people and restore democracy by removing a dictator,” Rubio tweeted on February 9.

However, Rubio seemed to backpedal on his statement when pressed, responding that the option wasn’t “really being considered by anyone.”

If it’s true that the option wasn’t really being considered, Rubio should have informed then-Secretary of State Rex Tillerson, who had made similar remarks favoring a coup that same week.

“In the history of Venezuela and South American countries, it is oftentimes that the military is the agent of change when things are so bad and the leadership can no longer serve the people,” Tillerson said at the University of Texas.

U.S. President Donald Trump had also been weighing such a possibility months prior: “We have many options for Venezuela, including a possible military option, if necessary,” he said in response to reporters’ questions on the South American country.

“We don’t talk about it, but a military operation – a military option – is certainly something that we could pursue.”

The backdrop for such calls is a scenario of diplomatic hostility from various U.S.-allied countries in the Americas that how vowed not to recognize Venezuela’s upcoming elections, and have demanded they be called off.

Such attacks began in the OAS, when Secretary General Luis Almagro attempted to use the regional organization to apply pressure on Venezuela, and only became sharper when a group of allied right-wing governments, known as the ‘Lima Group,’ sought to exclude Venezuela from the Summit of the Americas.

The six countries that make up the Lima Group have dealt a blow to regional integration by withdrawing from Unasur, a regional bloc that was promoted by Chavez and other progressive leaders. The split has divided the region into two ideological camps: those who reject intervention in state affairs, and those who back U.S.-led calls to apply pressure on Venezuela.

While the Lima Group has repeatedly called on Venezuela to halt its elections, Venezuela’s National Electoral Council President Tibisay Lucena rejects such calls as “grotesque.”

“It’s grotesque. How is a foreign government going to ask for that? The CNE obeys the statutes of the constitution and the sovereignty exercised through the vote, not foreign governments,” Lucena told teleSUR.

“They seek more democracy, but they want to eliminate an electoral process; they want to prevent the people from deciding, so what is their concept of democracy?”