Analysis: Cuba looks beyond US for wind alliances 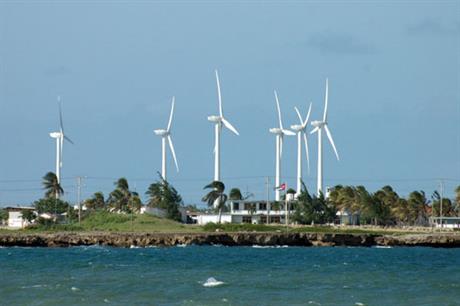 CUBA: Cuba’s government has set itself the target of supplying 24% of its electricity needs from renewables by 2030 as part of a plan to attract foreign investment.

Renewables currently only provide 4%, with wind contributing 0.1%. Cuba’s wind capacity totals just 11.7MW installed in four projects. Development has been hampered by the US trade embargo in force since the Cuban revolution in 1960.

Speaking to Windpower Monthly, Antonio Valdés Delgado,Cuban executive secretary of the sustainable development programme for renewable energy sources, said the embargo made it harder for Cuba to build wind capacity than for any other country in the Latin American/Carribbean region.

Despite the proximity of the US and the overcapacity in its manufacturing, Cuba’s four projects use technology from as far afield as France, Spain and China. Turiguano Island, a 450kW demonstration project built in 1997 uses Ecotecnia turbines, while the 1.65MW Los Canarreos project installed Vergnet turbines (2007).

Speaking about plans to bring in foreign investment, Valdés Delgado said that “wind manufacturing could offer Cuba’s industry the opportunity to establish alliances with overseas partners”.

Official studies suggest that the country’s wind energy potential is between 1.2GW and 3.5GW. More than 32 areas of the country have been examined by consultants including DNV GL. “From the available wind resource, Union Electric [the state-owned electricity distribution company] has studied and planned to install 633MW in 13 wind farms with capacity factors above 30%, thus resulting in more than 1 TWh/year and prevent the emission of more than 900,000 tonnes of CO2.”

Among planned projects, 13 are expected to be installed in the east of the island, 11 with a capacity of 51MW each and the other two at 36MW each. One project, located in the province of Las Tunas, signed a 51MW deal with Goldwind in December. These machines are set to be installed next month.

At present, with total installed power of almost 6GW, Cuba is highly dependent on fossil fuels for the production of electricity. Over 50% of the fuel used is imported, representing 96.2% of energy consumption. “We are looking for to reduce the inefficiency of the electrical system, the dependence on fossil fuels and the high cost of energy that is delivered to consumers,” said Valdés Delgado.

In total, the plan for foreign investment in renewable energy hopes to reach 2.1GW by 2030. This includes the installation of 755MW through 19 bioelectrical plants, 700MW in solar farms connected to the national power grid and 74 small hydropower plants with more than 56MW.