In 1959, the corrupt Bautista regime was overthrown in Cuba. The dictator Bautista had sold out his own people for corporate (and Mafia) dollars from the United States, and his overthrow was badly needed. While it can be debated what kind of government and economic system the country should have adopted after Bautista’s overthrow, it cannot be debated that the Cuban people (as a whole) are better off now than they were before the overthrow. They have universal education with one of the highest literacy rates in the world. They have an excellent system of medical care that provides free care to all citizens (and even exports doctors to help other nations). And Cuban citizens no longer must starve because of government inaction.

When that revolution in Cuba happened, the government of the United States unfortunately overreacted. They broke off diplomatic relations with Cuba, and established an embargo of that nation that cut off business with or travel to Cuba. While most other Western nations initially abided with that embargo, they have long since abandoned it — and they have re-established normal diplomatic relations and are now doing business with Cuba (and allowing travel there). But the United States has not. It still clings to those failed policies.

I have advocated on this blog that the United States should end this silly embargo and normalize relations with Cuba. I do so for the following reasons:
1. The embargo has failed, and the U.S. is the only nation still trying to enforce it.
2. The embargo hurts both countries.
3. The lack of diplomatic relations hinders cooperation that would benefit all of the America’s.
4. The choice of government and an economic system is the business of Cuban citizens — not the United States government.
5. Cuba poses no danger to the United States.

The feeling in this country in recent years is that most Americans support the stance of the United States government — that the embargo and the lack of diplomatic relations should continue. But that is simply not true. A significant majority of Americans now want to normalize relations with Cuba — and equally significant majorities want to allow travel to Cuba by U.S. citizens, and to allow U.S. businesses to do business with Cuba. Americans know these policies have failed, and they are ready to dump them.

Note that this is not only the majority opinion of all adults, but also most groups (including Republicans). Only one group lacks a majority supporting the normalization of relations — those with a high school education or less (and that group has a plurality supporting it). 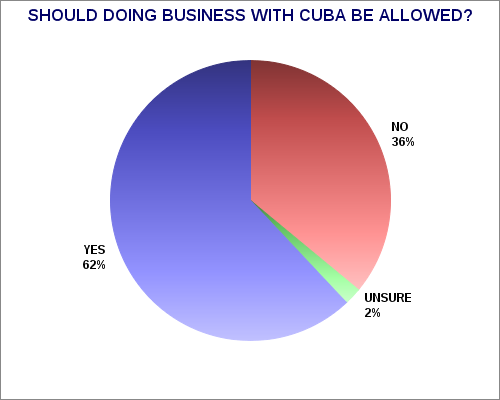 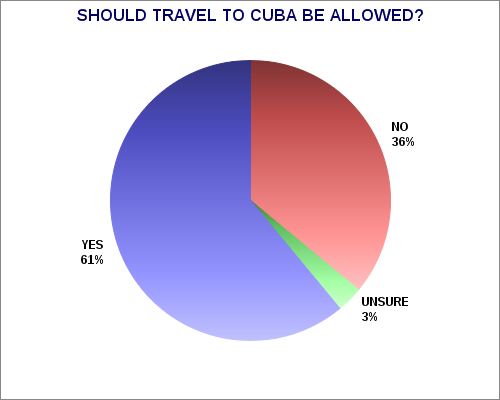 This information is from a nonpartisan the Atlantic Council Poll (conducted by Republican pollster Glen Bolger and Democratic pollster Paul Maslin). It was done of 1,024 randomly chosen nationwide adults between January 7th and 22nd, and has a margin of error of 3.1 points.