Posted on September 25, 2016 by Anthony Brenner 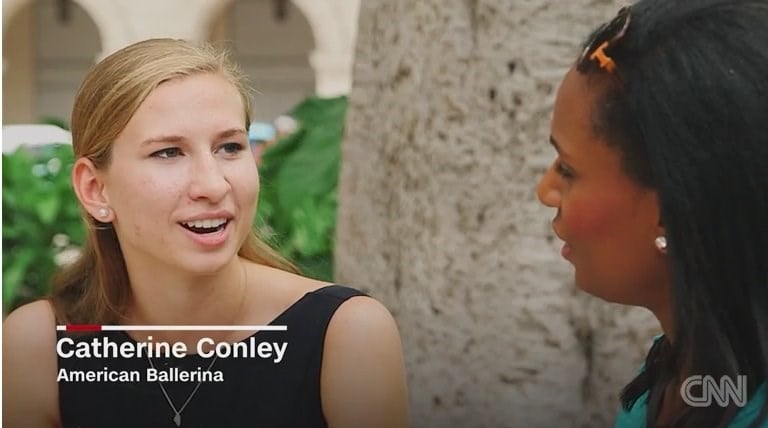 HAVANA (CNN) — Catherine Conley never thought she’d end up spending a year in Cuba, but the 18-year-old ballerina is breaking boundaries as the first American to train in the country’s famed ballet system.

She arrived, ready for her adventure in Havana a day after commercial flights from the US to the communist country started back up last month.

“I feel incredibly honored to be the first American to come here (to train) and symbolize the two countries coming together,” she told CNN. “A few years ago — even last year — this wouldn’t have been possible.”

Conley, who graduated from high school last spring, is the first American since U.S. and Cuba moved toward normalized relations to study at the world renowned National School of Ballet in Havana. She will train with some of the best dancers her age and she’s put college on hold to do it.

Conley has been dancing since she was a child and trained at the Ruth Page Center for the Arts in Chicago. During a visit to the US the director at Cuba’s national school of ballet saw Catherine dance and she was impressed.

Ballet is considered one of Cuba’s greatest exports — classes are subsidized by the Cuban government — and Conley said there is even a television channel dedicated to the form of dance that all Cuban citizens can watch.

Cuba has produced some of the most famous ballerinas in the world — including Alicia Alonso, who founded the National School of Ballet.

“I love the culture here,” Conley said. “The kids here enter into the school to become ballet dancers. They’re not doing it for a hobby so therefore the training is really, really intense.”

Conley said she hopes she will be the first of many ballet students to come and train in Havana with the National School of Ballet.

“(The people at the school) have been so open and welcoming,” she said. “I think that’s reflective of where the two countries are looking to go.”

CNN was not allowed access to the ballet school during a trip there.

Cuban ballerina Xiomara Reyes, who leads the Washington School of Ballet, said the art form shouldn’t be political when it comes to the rocky relationship between the United States and Cuba.

“I don’t think ballet should be political,” Reyes said. “We are actually an art form that doesn’t have words.”