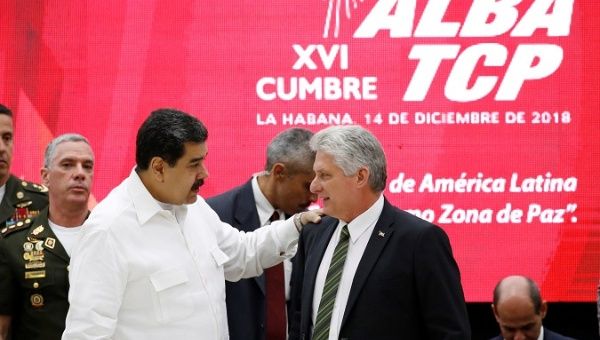 Venezuelan President Nicolas Maduro and other leaders arrive in Cuba to attend the Summit of the Bolivarian Alliance of the Peoples of Our America (ALBA).

Dec 14 (teleSUR) The countries that make up the Bolivarian Alliance of the Peoples of Our America (ALBA) gather in Cuba Thursday to celebrate 14 years since its creation, to defend regional peace, and consolidate Latin American and Caribbean integration.

Cuban President Miguel Diaz-Canel kicked off the summit by delivering a speech that stressed the importance of ALBA for regional integration and also rejecting the economic blockades that have been placed on several nations in Latin America such as Cuba and Venezuela. “We have and must take into account the economic blockade against several of our countries,” Diaz-Canel told the gathering leaders.

“It was the ALBA countries that were able to repeal in the OAS annual Assembly the infamous Cuba suspension as a member of the OAS 1962,” he added referring to the Organization of American State. “We must permanently focus on the construction, strengthening, and defense of unity. It is our most precious asset, the debt with our heroes and the future of our children.”

Venezuelan President Nicolas Maduro, arrived in Havana, Cuba late Thursday to participate in the summit, spoke after his Cuban counterpart and highlighted the importance of ALBA. “This annual summit is always opportune to renew the political strength, ideas, and projects of our Bolivarian alliance,” Maduro told the audience. “Alba has been and is the only project of integration and union of the peoples of Latin America and the Caribbean that has managed to reach the life of the humble to bring love, solidarity, presence.”

He went on the thank “the 12 present governments and the peoples, all the solidarity, courage and understanding with the Bolivarian Revolution in these months of the battle for truth and peace.”

Maduro also spoke of the economic blockade on Cuba by the United States, at a time when his own country suffers a similar economic war in favor of coups and military interventions. “Cuba in 1994 was a country that had been subjected to a double blockade, the one of the American empire and the one that had to live in the special period product of the dissolution of the Soviet Union.”

Upon arriving to the Havana he said: “We come to a Summit where we will share ideas in the midst of complex and difficult circumstances, especially with the arrival of extremist governments in the south of the American continent, (like) in Brazil, where ALBA has to grow,” Maduro said. 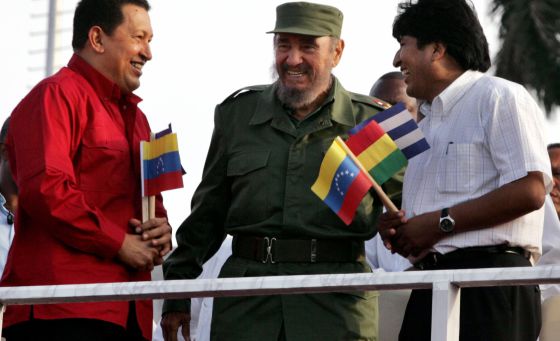 “14 years have passed since the creation of ALBA-TCP. An alliance that has proven that another world is possible. The peoples will continue to work to strengthen our relations of peace and future. Long live the eternal legacy of Chavez and Fidel! #AlbaEsFuturo”

ALBA advocates for political, social, and economic collaboration between member states in order to advance the structural transformations necessary to consolidate social and economic development, as well as to defend the independence, self-determination, and identity of the peoples of Latin America and the Caribbean.

This year’s summit will focus on the commitment to Latin American and Caribbean unity, as well as the need to grow strong while respecting diversity. During the conference, ministers and heads of delegation will review objectives reached in 2018 and will analyze what’s ahead for 2019.

Cuban President Miguel Diaz-Canel, shared a quote by ALBA’s founder, Hugo Chavez, ahead of the summit.

“ALBA is the necessary union of the countries of Latin America and the Caribbean; a historical project, the formation of a geopolitical space that is just beginning, as the definition of its name indicates, ALBA means sunrise,” he tweeted.

The Bolivarian Alliance for the Peoples of America was founded in 2014 by Latin American leaders Fidel Castro of Cuba and Hugo Chavez of Venezuela.

Comprised of Venezuela, Bolivia, Cuba, Nicaragua, Saint Vincent and the Grenadines, among others, the Bolivarian alliance formed as an alternative to the United States’ neoliberal Free Trade Area of the Americas (FTAA), opposed by social movements throughout the continent.

Presidents and representatives of Cuba, Bolivia, Ecuador, Nicaragua, Dominica, Antigua and Barbuda, Saint Vincent and the Grenadines, Saint Kitts and Nevis, Grenada, and Venezuela will be present.