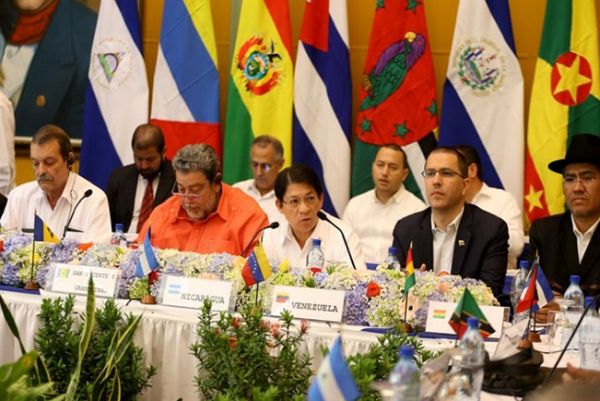 The Political Council of the Bolivarian Alliance for the Peoples of America (ALBA) concluded its ordinary meeting calling for the defence of the sovereignty and self-determination of all people.

Nov 9 (teleSUR) At the end of the 17th Ordinary Meeting of the Political Council of the Bolivarian Alliance for the Peoples of America (ALBA), held in Managua, Nicaragua Thursday, the group adopted a declaration which rejects any and all attempts of U.S. President Donald Trump Administration’s mandate to interfere with the nations of Latin America.

ALBA, which was founded in 2004, is the Latin American and Caribbean countries’ integration platform that stresses solidarity, complementarity, justice, and cooperation.

In response to the new wave of U.S. interventionism in Latin America, the ministers and heads of delegations of the member countries of the Alliance reiterated the need of political integration and consensus as a way to defending the sovereignty and self-determination of peoples.

“We want to ratify that, those moments when imperialism seems to dominate processes are the moments in which the Bolivarian Alliance, the alliance of the peoples, has to unite and not only to resist; we are here to advance toward the union and integration of our peoples,” the Venezuela Minister of Foreign Affairs Jorge Arreaza remarked.

The ALBA Political Council also ratified its unconditional support for Nicaragua, Venezuela, Bolivia and Cuba, countries which have been resisting foreign actions aimed at destabilizing their economic and political systems. It was announced, too, that Cuba will host, in December, the 16th ALBA Summit of Heads of State.