ALBA Denounces The Return of US Imperialist Monroe Doctrine 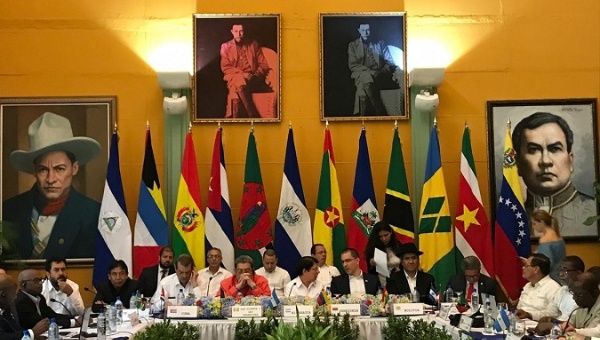 Nov (teleSUR) The Bolivarian Alliance for the Peoples of Our America – Peoples’ Trade Treaty (ALBA-TCP) issued a declaration restating its commitment to the unity of the peoples of Latin America and the Caribbean through political agreement and integration, after a meeting in Nicaragua.

The ALBA-TCP reaffirmed its commitment to finding the path toward independence and sovereignty, as stated in the final declaration of the XVII meeting of the Political Council of ALBA-TCP. They reject any form of interventionism and colonialism in the region, and issued an alert about the rise of the far-right wing around the world and the region, which has both strengthened and been strengthened by said interventionism.

Latin America and the Caribbean was declared a Peace Zone in 2014, and based on that ALBA said, “We reaffirm the need to strengthen unity in the diversity of our region, through political coordination and integration, as well as the defense of our sovereignty and self-determination.”

“We alert the international community about the advance of far-right political systems at the international level, and especially in Our America. This advance could mean an increase in aggressions against the progressive peoples and governments of the region. The ALBA-TCP will be attentive to the defense of the peoples of our region.”

The Latin American region has been, basically, divided into those countries backing U.S. foreign policy and countries who repudiate it to continue fighting for self-determination in the region. The second group has been more and more under pressure in the past few years by a number of forces. Primarily, by the so-called Lima Group, an ad-hoc group created in August 2017, known for its anti-Venezuela stance and alignment with U.S. foreign policy. Additionally by the change of political orientation of Ecuador, that nowadays has had a tighter relationship with the U.S. since the visit of Vice President Mike Pence to Ecuador in June. The elections of far-right politicians Sebastian Piñera as president of Chile in 2017, and of Jair Bolsonaro as president of Brazil (the biggest country in the region) in October 2018 are also worrisome.

In April, as Bolivia was taking on the pro-tempore presidency of the Union of South American Nations (Unasur), the governments of Argentina, Brazil, Chile, Colombia, Paraguay and Peru, six of the international body’s 12 member states, crafted a letter to Bolivian Foreign Minister Fernando Huanacuni announcing their “temporary” withdrawal. The countries adduced their withdrawals to a lack of direction and leadership as justification for their decision, but political analysts in the region argue that the timing reveals, above-mentioned, ideological reasons rather than concerns over Unasur’s administrative and operational challenges, as wrote Valerie Carmel.

Through a public and coordinated attack against Unasur and other integration mechanisms, the U.S.-oriented right-wing entities are campaigning against those left-leaning governments remaining in the region who are resisting the return of U.S. dominance and its interventionist approach.

The final declaration also denounces the imperialist strategy to dismantle the integration processes in Our America. “We urge the governments of Latin America and the Caribbean to preserve the progress made to integration in the region over the last decades. The strengthening of regional solidarity is the best response to threats of an interventionist nature that threaten the sovereignty of our peoples.”

The affirmation on strengthening a region based on self-determination is also based on the rejection of “the attempts by the US government administration to resuscitate the unfortunate Monroe Doctrine, unacceptable political justification of interventionism, and imperialist domination in our region.”

The ALBA countries rejected colonialist and imperialist interventionism led by the U.S., and adopted by some in the region. For example the unprecedented expansion of the North Atlantic Treaty Organization (NATO) to Latin America via Colombia. In May, then-President Juan Manuel Santos announced that Colombia would become part of NATO, the first Latin American country, categorized as a “global partner.”

“We express our concern about the most recent announcements about the increase of the presence and cooperation of the North Atlantic Treaty Organization (NATO) with some countries of our Latin America and the Caribbean, which is a potential threat to peace and security.”

Several political analysts, including Bolivian President Evo Morales, have warned about possible military invasions in the region, the most likely against Venezuela. “We condemn the covert invasion of the United States government, who are sending a Pentagon ship to Colombia under the guise of ‘humanitarian aid’ for our Venezuelan brothers,” stated Morales in August.

“We reject the systematic and interventionist actions of the secretary general of the OAS, and of some of the countries that intend to attack the sovereignty, self-determination and constitutional order of the Bolivarian Republic of Venezuela and other countries in which their people have decided to govern themselves without guardianship of any kind, which would result in the destabilization of the region.”

The ALBA-TCP ministers highlighted the importance of the alliance, to counteract the persistent attacks against the region and those movements rejecting interventionism. “We declare that our Alliance has more validity than ever, we have been strengthened by the most recent attacks of the Empire and its allies. Far from betraying us, they strengthen us and encourage us to continue fighting in the name of the dignity of our peoples.”

They stood out to support the governments and people of Venezuela, Cuba, Nicaragua, Bolivia and the Caribbean region that have bravely resisted the aforementioned attacks. At the same time the proclaimed “the construction of a new international order; fair, equitable and inclusive, where there are no empires or hegemonies and relations between States are based on respect for the peoples and institutions chosen by them and the diverse cultures that coexist in the world.”

The declaration concludes by expressing “that the ALBA-TCP has demonstrated that another world is possible on the basis of union, trust, respect between peoples, through educational, cultural, social and economic missions, among other initiatives.” And announcing the XVI Summit of Heads of State and Government of ALBA-TCP, on Dec. 14, 2018 in Havana, Cuba.