A group of government, hospital, academic and public-health leaders from the Akron area recently traveled to Cuba to learn ways to improve local medical care. 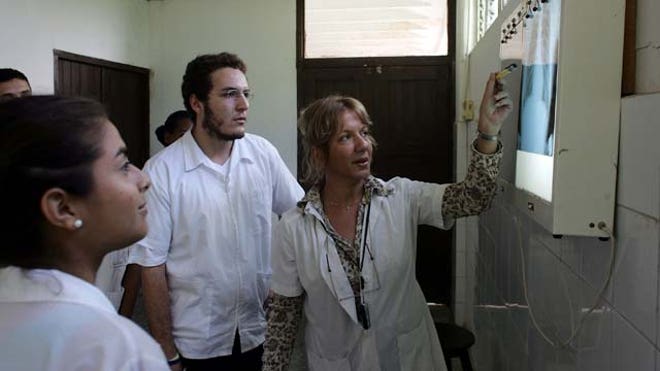 “What I wanted to do was put together a trip that would focus on taking people from the community here… to Cuba to get a sense of how a poor country has managed to actually create a health system that actually has the same health status of the United States — and they do it for a lot less money,” said trip organizer Dr. C. William Keck, former director of health for the city of Akron and a past president of the American Public Health Association.

Mayor Don Plusquellic, Akron Planning Director Marco Sommerville, Summit County Executive Russ Pry and Summa President and Chief Executive Thomas J. Strauss were among those who went on the weeklong trip. Sommerville attended because he is Akron’s representative on the Summit County Board of Health.

For some, including Plusquellic, this was a maiden voyage to Cuba. Not for Keck, though, who has been making regular trips to study the universal public health-care system in Cuba as a board member for a nonprofit group called Medical Education Cooperation with Cuba, or MEDICC for short.

MEDICC promotes cooperation among Cuba, the United States and other countries “to improve health outcomes and equity, offering the Cuban experience to inform global debate, policies and practice.”

According to MEDICC, Cuba has the lowest infant mortality rate in the hemisphere. The group’s research has found a child born in the eastern mountains of Cuba has a better chance of surviving than a baby born in Washington, D.C.

Cuba has managed to create strong health-care services with a focus on wellness and disease prevention “by collaborating across both governmental and community sectors,” Keck said.

“Everybody there has a doctor, and they see that doctor at no charge to themselves,” he said.

Keck thought local leaders could learn ideas that could be used to help residents in the Akron area by visiting Cuban hospitals and doctors’ offices and meeting with public-health officials there.

“Their resources are so limited that they do their best to prevent stuff, rather than wait until it develops and you have to use more expensive treatments,” Keck said. “It’s a nice approach, one that we should emulate.”

He said he’s concerned a local health-promotion initiative called the Accountable Care Community has been floundering lately after its leader recently left the Austen BioInnovation Institute in Akron for another job opportunity.

The idea was to get local government and health-care leaders together in Cuba “and really focus on what’s there and hopefully use the example in Cuba as a stimulus to re-energize our efforts,” Keck said.

During the trip, the 15 participants also visited several Cuban biotech businesses and met with American students studying medicine in Cuba who might be interested in coming to Akron for hospital or clinic rotations, Keck said.

Going forward, the trip’s participants agreed to continue to meet to discuss ways to move the Accountable Care Community initiative forward, he said.

“I think the trip worked very well,” he said.

Plusquellic, who has long wanted to travel to Cuba, also thinks the trip will be beneficial. He said the federal health-care act requires communities to develop programs that aim to keep people healthy rather than having them pay for medical care after they’ve gotten sick.

Plusquellic said the city saved money by merging its health department with Summit County’s and this savings could be used “as seed money to start something new” to promote preventive care.

Plusquellic and other leaders who attended the trip plan to continue to meet to brainstorm ideas for how what they learned can be applied in Akron and Summit County.

Akron USA, a nonprofit group set up by Plusquellic when he was president of the U.S. Conference of Mayors, paid for Plusquellic’s trip. The city paid for Sommerville’s trip, which cost about $5,000.

Plusquellic said he is bothered by how — because of the embargo against Cuba — the United States cannot provide used medical equipment to Cuba and Cuba cannot give medicine to the United States. He said Cuba has a diabetes drug that he thinks might have saved a friend of his who died from complications from diabetes. He said he may bring a resolution to Akron City Council urging the federal government to allow exceptions to the embargo for medical equipment and medicine that could be beneficial to both countries.

“If nothing else, Americans ought to have the right to the best medical care,” Plusquellic said. “The U.S. won’t let it in. I know this guy could have been saved.”