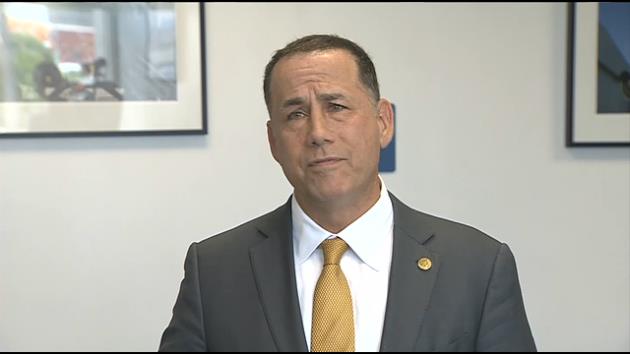 MIAMI INTERNATIONAL AIRPORT, Fla. (WSVN) — A South Florida mayor who just returned from a trip to Cuba is generating controversy after he announced he would welcome a local Cuban consulate.

While there, he toured Havana, stopped at the U.S. Embassy and even attended a baseball game. During his trip, Levine and Miami Beach Commissioner Ricky Arriola also met privately with Cuban foreign affairs officials to discuss the idea of opening a Cuban consulate in Miami Beach.

Speaking to reporters shortly after his return to South Florida, Levine explained why a Cuban consulate would be good idea. “Miami Beach will have some competition in the future. We think we offer a very different product, but I know, by having potentially a consulate office in Miami Beach, the folks that are gonna be going directly to Havana and going to Cuba will maybe have an additional reason to come to Miami Beach and get their paperwork in order and maybe possibly break up their trip,” he said.

The mayor said the consulate would also provide an additional resource to Cubans living in South Florida. “We have a tremendous amount of Cubans living in Miami Beach, and as you know, the population is significant in South Florida, in Miami-Dade,” he said. “I think, from a constituency point of view, it would be horrible to make the Cubans that we all know in Miami, that want to visit their family, to have to go to Tampa, for example, to fill out the proper paperwork.”

Meanwhile, City of Miami Mayor Tomás Regalado, an outspoken opponent of having a Cuban consulate in South Florida, expressed his disapproval of Levine’s efforts. “I have a message for the mayor. I think it would bring trouble,” he said. “It would be a security challenge. It’s going to [cause] a lot of protests.”

Even though they may be on board, local officials don’t have a say in the final decision. It is up to federal authorities and the Cuban government to approve a consulate on U.S. soil.