After 1,000-year split, pope and Russian patriarch embrace in Cuba 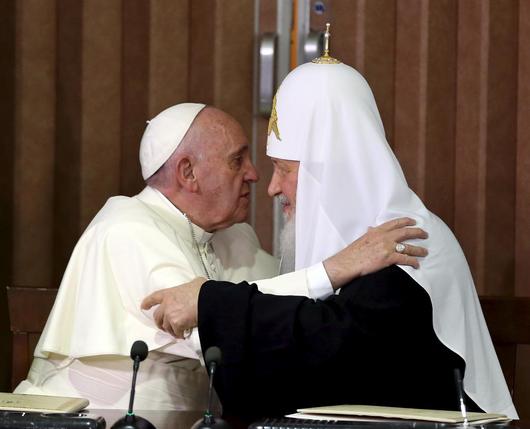 Reuters – Pope Francis and Russian Orthodox Patriarch Kirill embraced and kissed on Friday in a historic meeting, uniting to issue a global appeal for the protection of Christians under assault in the Middle East.Nearly 1,000 years after the Eastern and Western branches of Christianity split apart, the meeting at an airport terminal in Cuba was the first ever between a Roman Catholic pope and a Russian Orthodox patriarch.

“In many countries of the Middle East and North Africa whole families, villages and cities of our brothers and sisters in Christ are being completely exterminated,” they said in a joint declaration in apparent reference to violence by militant groups such as Islamic State.

“Their churches are being barbarously ravaged and looted, their sacred objects profaned, their monuments destroyed.”

They also said large-scale humanitarian aid was required to tend to refugees fleeing Syria and Iraq, lamenting the “massive exodus of Christians.”

Cuban President Raul Castro stood to the side during the ceremony, enjoying another moment in the international limelight after receiving Francis last year and restoring diplomatic relations with the United States recently, meeting President Barack Obama in Panama in April.

Cuba is also sponsoring peace talks between the Colombian government and leftist rebels seeking to end a 50-year war.

“If it continues this way, Cuba will be the capital of unity,” Francis said.

“Now what’s left is Colombia,” Castro told reporters after the pope boarded his plane for Mexico, where Francis arrived on Friday evening for a five-day visit to some of the poorest and most violent corners of the country.

Dissidents in Cuba’s one-party political system have remarked on the government’s willingness to promote dialogue for foreigners while dismissing political opponents as mercenaries doing the bidding of the United States.

The two religious leaders, guests of a Communist government, came together only a week after the encounter was announced. Such a meeting had eluded their predecessor, but Francis had issued a standing invitation to meet anytime, anywhere.

The moment came while Kirill was visiting the Caribbean island and Francis added a brief stop on his way from Rome to a long-scheduled visit to Mexico.

“Finally,” Francis said as he and Kirill entered through doors on opposite sides of a room at Havana airport. “We are brothers.”

Francis, dressed in white with a skullcap, and Kirill, wearing a tall, domed hat that dangled a white stole over black robes, joined arms and kissed on both cheeks.

“It is very clear that this is the will of God,” Francis said.

Their meeting carried political overtones, coming at a time of Russian disagreements with the West over Syria and Ukraine.

The Russian Orthodox Church is closely aligned with the Kremlin, which is in turn an ally of Cuba.

The Argentine pontiff helped the rapprochement between the United States and Cuba after more than five decades of estrangement.

The pope, leader of the world’s 1.2 billion Catholics, is seeking to repair a much longer rupture. Eastern Orthodoxy split with Rome in 1054.

The declaration called for Europe to remain faithful to its Christian roots and restated several traditional Christian teachings such as opposition to abortion and marriage being reserved for a man and a woman.

The Russian Orthodox Church takes a stronger stand on these issues in public than Pope Francis, who supports these teachings but often speaks of other issues such as poverty and protecting the environment, which were also mentioned in the text.