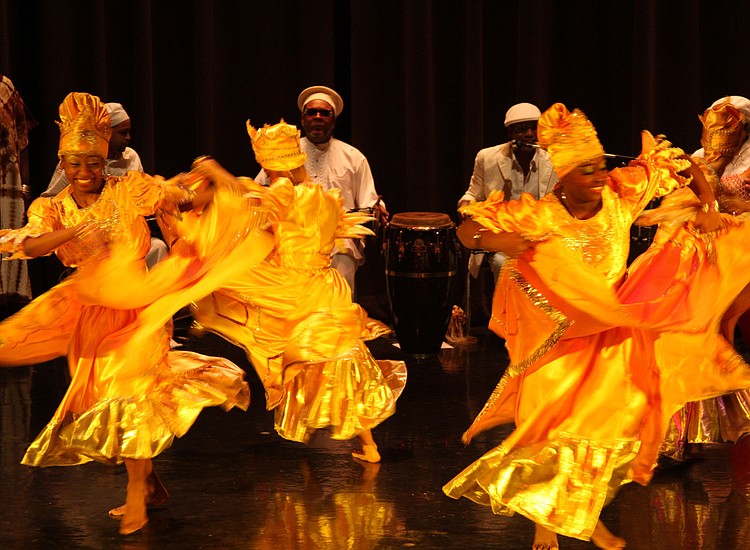 “Siete Mares,” a new work by Afro Cuban Orisha Dance Theater, is set to have its world premiere this weekend.

With support from the Center for Traditional Music and Dance, New York State Council on the Arts and City College Center for the Arts/Aaron Davis Hall, the group is bringing from Cuba 10 of the foremost Afro-Cuban artists to perform as part of the program.

A dance-drama performance reflecting the cultural perspective and dance identity based on the history and the mythology of Afro-Cuban culture, “Siete Mares” is the third of the Patakin (mythological story) series, written, choreographed and directed by Danys Pérez “La Mora”—an international Afro-Cuban folklore master specialist from Santiago de Cuba. It is a new work of Orisha culture illustrating Yemayá, a powerful goddess and one of the queens of Orisha deities who represents ocean and maternity.

The Saturday, Dec. 17, event is at 7 p.m. and the Sunday, Dec. 18, event is at 3 p.m. Tickets for the event are $30 general admission, $25 for students/children and $20 for seniors and can be purchased online at www.citycollegecenterforthearts.org, through the box office by telephone at 212-650-6900, or in person (Tuesday through Friday from noon to 6 p.m.).

City College Center for the Arts’ Aaron Davis Hall is located on the campus of the City College of New York, at West 135th Street and Convent Avenue (129 Convent Ave.).

Currently Oyu Oro is based both in New York, where Pérez lives, and in Santiago de Cuba, where she is from. Many of the members in Santiago de Cuba Oyu Oro are principal dancers and musicians from the dance companies who Pérez originally trained in Adiro Omode, the children’s dance company she founded in the 1990s.

Oyu Oro has spent nearly a decade in the United States cultivating a diverse community of students, professional artists and supporters of the arts who participate in classes and attend performances in the America and in Cuba. The company hopes to continue spreading Afro-Cuban culture through the aesthetic of performing arts, experiences conveyed in the classes, lectures and performances that Peréz and other guest master artists facilitate to maintain humanistic and spiritual values, characteristic of Afro-Cuban culture.