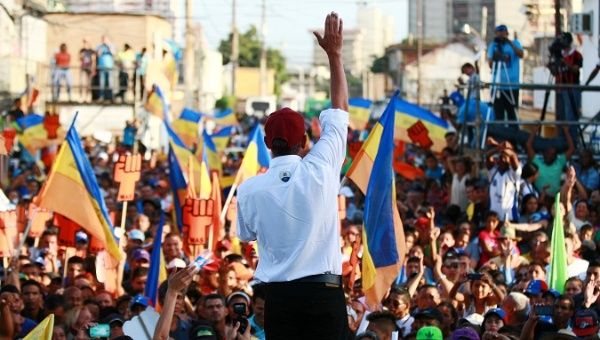 “We refuse to be victims of a media disinformation operation,” reads an online petition.

May 14 (teleSUR) An international group of intellectuals and activists are demanding media corporations to inform on the upcoming Venezuelan elections in a more balanced and honest way, instead of reproducing a single narrative that’s being spread by most media outlets.

“We oppose the media narrative that seeks to conceal and stigmatize the diversity of opinions. We refuse to be victims of a media disinformation operation, the objective of which is to create – in international public opinion – the conditions to justify anti-democratic actions against Venezuela,” reads and online petition on the medium web platform.

In the petition, called “Venezuela: I do not want to be a victim of media disinformation,” a group of people including Argentinian Nobel Peace Prize Adolfo Perez Esquivel, the Spanish writer and journalist Ignacio Ramonet, the Colombian lawyer and former senator Piedad Cordoba, the Landless Workers’ Movement coordinator Joao Pedro Stedile, and economists Mark Weisbrot and Jacques Sapir, express their concerns regarding the media misinformation about the Venezuelan elections, and demand “balanced information that allows us to understand the complexity of the situation in Venezuela.”

“In this tense political context, we – citizens of the world, targeted by the great international media corporations – claim our right to be informed in a plural, balanced and honest way about the upcoming events in Venezuela,” the petition reads.

“We refuse to be victims of a media disinformation operation whose objective is to create the necessary conditions on international public opinion to justify anti-democratic actions against Venezuela. I SIGN THE ONLINE PETITION.”

Venezuelans will take part in the May 20 electoral process to elect a new president among three candidates, two of which are challenging the incumbent Nicolas Maduro, besides the local legislative councils.

The petition explains that the election will be overseen by over 2,000 international observers, including organizations such as the African Union, the Caribbean Community and the Electoral Experts Council of Latin America, and media still claims the process is a fraud.

“This democratic appointment, however, is already being boycotted by the political and media arms of powerful groups nationally and internationally denouncing the results before they have even been announced,” says the petition.

Despite opposition candidates having actually said they trust the Venezuelan electoral system, other sections of the opposition are thinking the process is a fraud and have called for abstaining from voting, while others even have called for a military intervention instead of taking part in the elections.