A lesson from Cuba 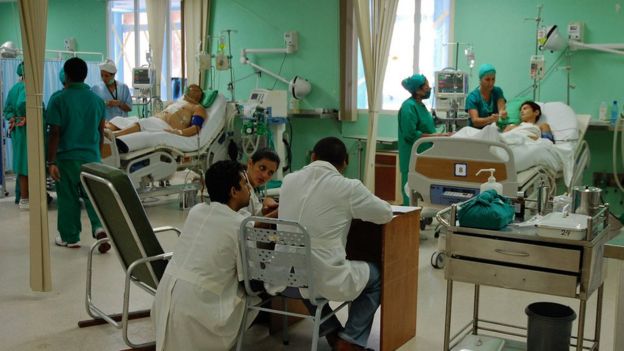 A group of us recently returned from a trip to Cuba on an educational visa. The beautiful architecture, country and classic cars were just the start of an impressive learning experience.

I’ll relate just one of those learning experiences here.

It started when one of the women in our group of 13 became ill. She was taken to the hospital by ambulance, received x-rays, lab work and meds, and then returned to her hotel by ambulance. There was no cost or paperwork to sign.

I first thought this might just be Cuban hospitality, but later learned that this is how healthcare works in Cuba. Everyone simply goes to the doctor, hospital or pharmacy for their healthcare needs with no out-of-pocket expense.

Of course healthcare is not free in Cuba and certainly not in this country. The difference is that Cubans pay only about 40 cents for every dollar that we pay for the same healthcare.

How is this possible?

Some would argue that those in the healthcare insurance business would lose jobs. True, but history has shown that this kind of progressive change creates even more jobs in the long run. Look at energy, for example, where there are now 10 times more jobs in alternative energy than there are in fossil fuels.

There are other savings in Cuba’s system as well like government contracted pharmaceuticals. There are no $6,000 pills. Attorneys looking for every opportunity to sue are not welcome. The list goes on.

The above refers to a Universal Single Payer Plan. The United States is the only developed country in the world without one. Canadian citizens, for example, pay out only $6,000 for every $10,000 that we pay and everyone is covered. It should be made clear that medical costs include not just insurance and costs associated with medical delivery, but also all taxes we pay for medical purposes.

Some would argue that this is socialism. Surprise. We are already a socialist country — Medicare, Social Security, the military, infrastructure and hundreds more.

Here’s a bonus of the Cuban system. Abortions are estimated to be only 10 percent in Cuba compared to what they are here because contraception options and women’s healthcare are entirely free. The Cuban government regards abortion as a choice between a woman and her God, not the government.

Politics aside, it’s likely that most could agree that “Obamacare” is too expensive and “Trump Care” would be too cruel. With healthcare for all being severely threatened at both the state and federal level, we all, with open minds, need to learn and understand how Universal Healthcare works.

We need to search out which of our legislators and candidates will work for us and which will instead take the side of the insurance and pharmaceutical industries which support them. Let’s continuously make our voices heard and vote at every opportunity.