When I reviewed the Cuban Crocodile in Long Beach in 2012, it was the only Cuban restaurant I knew of on Long Island. It was damaged by Hurricane Sandy, and Corazon de Cuba opened in its former quarters less than four months ago.

A dessert of rice pudding empanadas, with ice cream and a strawberry sauce. Credit Yana Paskova for The New York Times

There are at least a couple of other Cuban places on the Island now, but Corazon de Cuba beats out the competition. It is an attractive restaurant, too, though not particularly Cuban in atmosphere, except for its loud, pulsating Latin music (which will be lowered on request). The restaurant’s brick and stucco walls and dark wood tables set with cloth napkins and votive candles would be at home in an Italian or a New American spot.

The food, though, says Cuba loud and clear. Our favorite appetizer was the grilled steak bocadillos: bite-size pieces of extremely tender skirt steak that had been marinated overnight. Noe Dominguez, an owner, said in a telephone conversation after my visits that the marinade included “secret Cuban spices.”

Both Mr. Dominguez and his business partner, Armando Lopez, are originally from Mexico. Mr. Dominguez added that when he was a child his family vacationed in Cuba frequently, and it was then that he fell in love with the cuisine. The partners are first-time restaurateurs; their chef, Oscar Juarez, has cooked at Cuban restaurants in Manhattan.

Running a close second to the terrific bocadillos coming from Mr. Juarez’s kitchen was a seafood salad called Long Beach salpicon (the word means a medley or hodgepodge). The calamari, shrimp, scallops and mussels in the just-right lemon vinaigrette were distinguished by their freshness and the tenderness of the calamari. No chewy rubber bands here.

Also making a good showing was an avocado salad of lettuce tossed with red onion, tomato and green olives, all crowned with a sliced and fanned-out avocado half. Good, too, was a chicken empanada with thin, crisp, flaky pastry, an abundant filling and a tasty habanero-and-corn-cream on the side. 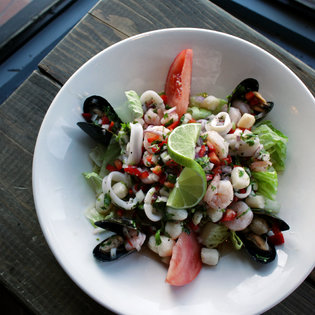 Two lesser lights were the shrimp fritters and a vegetable soup special full of broccoli, carrots, peppers and chunks of tender pork in a cream-touched broth; it needed a bit of salt to bring it to life. The fritters boasted a spicy tartar sauce, but they were boringly smooth and tasteless.

The best of three entrees highlighted in a box on the menu as Classic Cuban Dishes was the ropa vieja. This flavorful mix of shredded, tender skirt steak and onions, peppers and tomatoes arrived atop a mound of rice and surrounded by a necklace of tender but not mushy black beans. The ropa vieja was a better bet than the picadillo, a mixture of ground beef, potatoes, peppers, garlic, tomatoes, olives and raisins, which lacked flavor despite its numerous ingredients.

The third Classic Cuban Dish, shredded, slow-roasted pork, was succulent and fork-tender. That same delicious meat was the star of the traditional pressed Cuban sandwich, which also contained ham, Swiss cheese, pickles, mustard and mayonnaise in a large Cuban roll. An accompaniment of mariquitas (thin, crisply fried green plantains with a garlic-olive oil dipping sauce) made the dish even better. 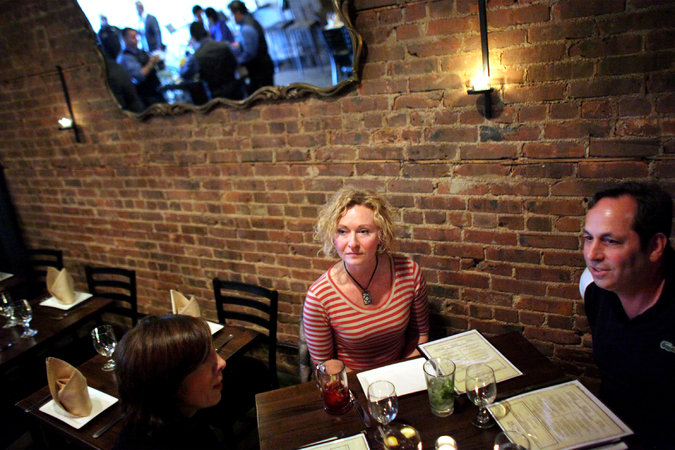 All entrees arrive with rice and beans, including the fish of the day. The one we sampled was flavorful pan-seared cod atop crisp asparagus in a wine and garlic sauce dotted with cherry tomatoes. Paella Española, with shrimp, mussels, clams, chicken and chorizo enveloped in moist rice, was another crowd-pleaser.

Desserts are made at the restaurant. Only doughy banana fritters failed to please; we gave high marks to the moist and chocolaty brownie à la mode, the satiny flan and the flaky empanadas filled with rice pudding and served with ice cream and a strawberry sauce.

When asked, Mr. Dominguez said his favorite dish was the vaca frita, skirt steak that is simmered, marinated, then shredded and sautéed until crispy. I’ve got to go back to try it.

THE SPACE Long, narrow storefront encompassing the bar and a two-tiered dining room with a total of 70 seats. Restrooms are on the upper level of the dining room, up three steps.

THE CROWD Lots of couples and small groups of young people. There were no children the nights of my visits. Waiters are personable and aim to please.

THE BAR A long, shiny L-shape bar with a dozen backless bar stools and a few high tables for two. Seven wines by the bottle ($30 to $32) and an equal number by the glass ($8 to $9). Sangria, mojitos, margaritas and daiquiris are available by the pitcher ($35) or the glass ($8).

THE BILL The same menu is served at lunch and dinner. Entrees range from $9.95 (sandwiches) to $26.95 (paella). Three-quarters of the entrees are under $20. American Express, Visa, MasterCard and Discover are accepted.

IF YOU GO Lunch is served daily from noon to 4 p.m. Dinner: Sundays to Thursdays from 4 to 10 p.m., and Fridays and Saturdays from 4 p.m. to midnight. Reservations are accepted and especially needed on weekends. Parking is on the street. A Cuban band plays Friday and Saturday evenings.