A government committed to serving the people 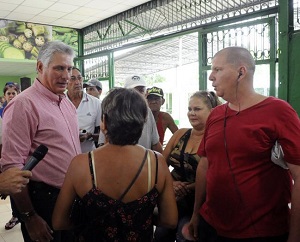 August 31 (Cubadebate) Santa Clara, Villa Clara.–Nothing could have been more natural for Villa Clara than the profound debates that took place yesterday during the analysis of the two-day central government visit to the province which included several sites of economic and social importance and interaction with the population in the province. The delegation was led by Miguel Díaz-Canel Bermúdez and Salvador Valdés Mesa, President and Vice President, respectively, of Cuba’s Councils of State and Ministers.

Transportation problems, the quality of milk and water, food production, and teacher shortages, among other issues of interest to the population, were discussed, confirming that this is a government committed to working for the people, Díaz-Canel noted.

Julio Lima Corzo, Party secretary in Villa Clara, and Alberto López Díaz, president of the Provincial Assembly of People’s Power, reported that to date 58% of dwellings damaged by extreme weather events have been repaired, and that, by the end of the year, all cases of total or partial roof damage will be addressed.

In terms of the sugar industry, it was reported that production was 38,000 tons short of projections as a consequence of unseasonal heavy rain and Hurricane Irma. Valdés Mesa called for redoubling efforts since the country’s needs a good harvest in Villa Clara this year.

Roberto Pérez Pérez, Vice Minister of Economy and Planning, insisted on the need to solve planning problems in the province, while Díaz-Canel emphasized the need to expand production of material goods destined for domestic consumption and export.

The Cuban president criticized a lack of vision on the part of the province’s bicycle factory, where electric scooters are assembled, yet batteries are often unavailable, generating economic problems and undermining the confidence of customers.

The President cited other examples of issues that must be addressed including those of the dairy industry.
Regarding water distribution, Inés María Chapman, a Council of Ministers vice president, stated that the province’s infrastructure is largely obsolete and requires significant investment, which is being considered; while Valdés Mesa addressed transport issues, noting the number of vehicles out of service and questioning use of fuel allocated for passenger transportation.