A Chance to Unseat Marco Rubio 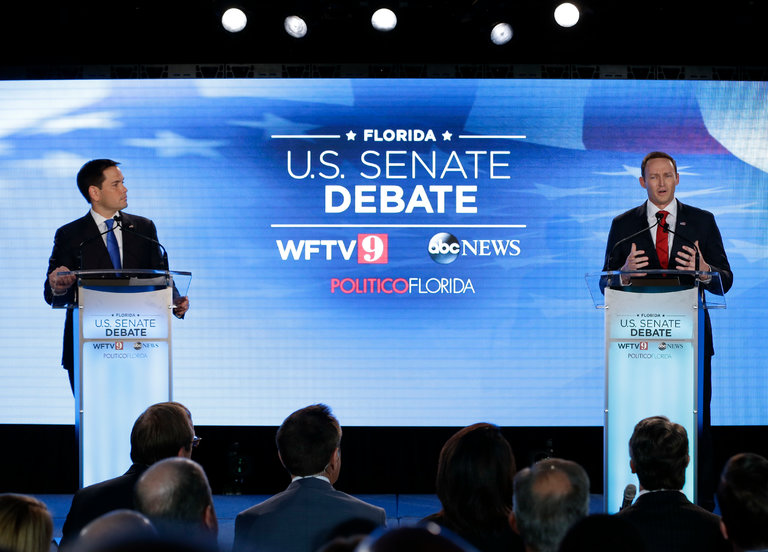 Just months ago, Senator Marco Rubio was seen by the Republican establishment as one of its best hopes for taking back the White House. Now, Representative Patrick Murphy, a second-term congressman, is within striking distance of defeating Mr. Rubio in the senator’s race to keep his seat.

The race is the most consequential among several in Florida in which Republican incumbents find themselves in unexpectedly tough fights. The plight of Florida Republicans — who seem largely resigned to a Clinton victory, given Hillary Clinton’s four percentage point lead in the polls — is in large measure a result of the name at the top of the ballot. But Donald Trump’s candidacy has only accelerated trends that have changed Florida’s political landscape in ways that Democrats have been more adept at seizing.

Representative Ileana Ros-Lehtinen, the dean of Florida’s congressional delegation, is fighting more vigorously than she ever has to fend off a Democratic challenger, Scott Fuhrman, a businessman who has little name recognition and is campaigning against Ms. Ros-Lehtinen’s rigid defense of the Cuban embargo. President Obama won the district by a tiny margin in 2008 and by nearly seven percentage points in 2012. This year, Mrs. Clinton is leading Mr. Trump by 17 to 23 percentage points in the district, according to polling commissioned by Mr. Fuhrman.

The changing Latino electorate is the key factor, with Cuban-Americans, who once swung reliably Republican, increasingly up for grabs, particularly younger voters who are more socially liberal than their parents and less dogmatic about the Cuban embargo. Some 58 percent of Latino voters in Florida back Mrs. Clinton, while 28 percent support Mr. Trump, according to a recent poll commissioned by Univision.

This pains Rudy Fernández, one of the architects of the Republican Party’s efforts to earn Latino votes during the 2000 and 2004 campaigns, which were instrumental in George W. Bush’s Florida victories. “It was a very inclusive message, a positive message, Reaganesque,” Mr. Fernández said. In November, he said, he will unenthusiastically vote for Mrs. Clinton and hope that Mr. Trump’s defeat forces a reckoning that reboots the party’s approach toward Latinos.

What this has meant for Mr. Rubio is that he can no longer rely on Cuban-Americans as a stalwart base in a state where many voters have become alienated by his hard-line conservative positions on issues such as gay rights, reproductive rights, gun control and the repeal of the Affordable Care Act, and by his shifting stance on immigration reform. Of course, the Trump factor is substantial, too. Mr. Rubio, who once called Mr. Trump a “con artist” wholly unfit to be president, now backs him. Many former Rubio supporters find that galling and indefensible.

For these reasons, Florida voters should support Mr. Murphy. But defeating Mr. Rubio, who earned a reputation on Capitol Hill as a disengaged lawmaker who skipped scores of key votes and hearings, shouldn’t be the only motive.

Mr. Murphy’s positions on climate change — an issue that Mr. Rubio seems deeply ignorant about — gay rights, gun control and comprehensive immigration reform make him by far a superior representative for Floridians. Mr. Murphy has also challenged Mr. Rubio’s obstinate support for the failed embargo on Cuba, which puts him on the right side of history and, increasingly, public opinion in Florida.

The senator is “someone who has put his own political ambitions ahead of what he really believes in,” Mr. Murphy said in an interview.

That is true, and a shame. If the Republican Party wants to shore up its eroding base in Florida in the post-Trump era, it will need fresh blood and forward-thinking politicians who are in step with voters on social issues and are willing to move past the Cold War.