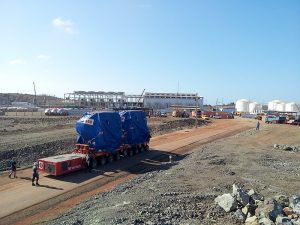 The new facility, near the nickel mining town of Moa in eastern Holguín province, consists of 10 generators providing a total of 184 megawatt, according to official media. It is part of the ‘Energy Revolution’ program, which has deployed dozens of fuel-oil generator clusters on the island, replacing Soviet-era, boiler-technology thermal power plants.

The Moa plant will provide enough power for the nickel industry in the area, as well as for the municipalities of Moa and Baracoa.

According to official media, the Moa plant cost 273 million pesos CUP ($10.3 million) to build, not including purchases abroad. The project is managed by a team from UNE’s nearby Felton power plant.

Cuban media did not provide more detail. According to a supplier, the engines were made by at least two different manufacturers — five by Germany’s MAN Diesel & Turbo, and four by Swedish-Swiss company ABB; the origin of the tenth generator could not be verified by Cuba Standard.

The trial run was with the first of the 10 generators.

On Feb. 6, Vice President Ramiro Valdés and Energy and Minister Alfredo López toured the power plant, which is close to 90% completed.

Faced with an electricity crisis caused by aging thermoelectric plants, an obsolete grid and hurricane damages, Cuba in 2006 decided to decentralize part of its electric system by deploying hundreds of fuel-oil generators that run 24 hours a day, and thousands of backup generators that kick in during peak hours or emergencies. The decentralized approach — which is part of a larger program dubbed “Energy Revolution” — helped Cuba eliminate extended blackouts in a matter of months, at a relatively low cost, and made the system more resilient to hurricane damage.

Other projects underway near Moa include a new power substation that will replace two old substations, as well as a 12-kilometer oil pipeline and a 10-km water line for nickel plants.

State company Cubaníquel is planning to reduce production at the nearby Ernesto Che Guevara nickel processing plant this year for improvements aimed at lowering its nickel production price. World nickel prices have been dropping continuously since 2012.