Posted on November 4, 2018 by Anthony Brenner 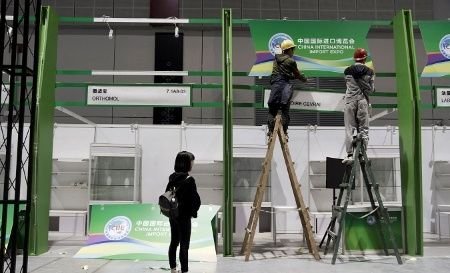 The cooperation between the two countries is strong in the areas of renewable energy, agriculture, tourism, mining, transportation and infrastructure, according to Xinhua.

Nov 3 (teleSUR) Several Cuban companies will accompany President Miguel Diaz-Canel to China in a bid to reaffirm ties and grow relations between the nations. The Cuban leader recently wrapped up a visit with another ally, Russian President Vladimir Putin, and is also scheduled to make stops in North Korea, Laos and Vietnam during the series of official state visits on his global tour.

“We are going to participate in the Shanghai expo with a delegation comprised of 34 Cuban firms and 40 business representatives,” Ruben Ramos, Vice President of Cuba’s Chamber of Commerce, said. The sectors that will be represented are: food, agriculture, biotechnology, pharmaceuticals, medical services, information technology and telecommunications, according to Xinhua news agency.

Some products being showcased at the China International Import Expo (CIIE) — between Nov. 5-10, in Shanghai — by Cuban companies include premium cigars, a cigar made specifically for the Chinese market, rum, seafood, minerals and sugars. The Cuban delegation aims to increase the volume of the products — with the help of new trading partners —  which are already being exported to the Asian giant.

But, not only traditional products will be present at the fair, Cuba plans to introduce the CIMAvax-EGF vaccine for lung cancer and Heberprot.P for diabetic foot ulcers.

“The potential (for growth) is there and Cuban companies attending the expo are very clear about that objective. We want to identify new partners and markets to introduce our exportable products, both traditional and new ones, as well as our professional services,” Ramos stated.

“Cuba is the first country in Latin America and the Caribbean to establish diplomatic relations with the People’s Republic of China (…) We believe that President Diaz-Canel’s visit will further consolidate and strengthen the traditional friendship between China and Cuba and promote new progress in bilateral ties under new historical conditions” Chinese foreign ministry spokesman, Lu Kang, declared.

China is currently Cuba’s second trading partner. In 2017, the volume of bilateral trade amounted to US$1.76 billion.

The cooperation between the two countries is strong in the areas of renewable energy, agriculture, tourism, mining, transportation and infrastructure, according to Xinhua.

Diaz-Canel’s international tour comes at a time when Cuba-United States relations, under President Donald Trump’s Administration, have taken a turn for the worse, after some progress was made during ex-President Barack Obama’s stint in office.

The Cuban leader’s visit to China can help secure important economic partnerships for the Latin American country which has been strongly affected by a U.S. economic blockade, since 1962.