3 Years After Restored Relations, A Look At Major Lazer in Cuba “Looking to the Future” 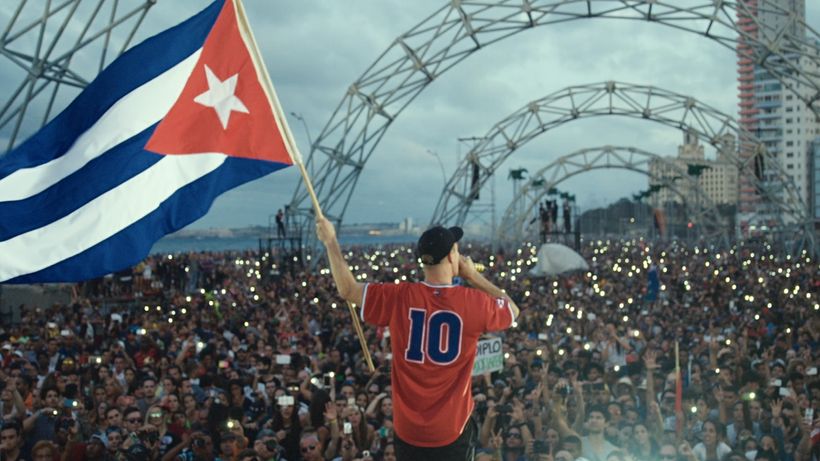 Dec 18 (Huffington Post) On a Sunday afternoon in March 2016, international electronic band Major Lazer descended on Havana’s seawall to perform for half a million Cubans. 40,000 people were expected. The malecón was flooded with Cuban youths from all over the island. It was a historic moment in US-Cuba relations and the show made an irreversible statement for both of our governments: the door has been opened, and free cultural exchange between the US and Cuba is here to stay.

Three years after President Obama’s announcement to restore ties with our neighboring island, I wanted to look back on the groundbreaking concert in Havana and discuss its importance in today’s diplomatic atmosphere. I talked to Jauretsi Saizarbitoria, who worked with the band as the producer of the new documentary “Give Me Future”, and Collin Laverty, a policy expert and entrepreneur who helped with the artists’ experiences on the island.

What are your thoughts on Give Me Future?

JS: The reason the film feels special is that it somehow bottles a certain moment in 2016, just roughly one week before Obama visited Cuba. There was a sense of hope in the air, and that Cuba and the US were finally moving away from this old tired enemy narrative.

CL: There is some incredible footage that really captures the energy and excitement at the concert. It shows how magical of a day that was for hundreds of thousands of people. It also goes beyond the concert and dissects a country at the crossroads, portraying many of the challenges Cuba faces and how youth are playing a role in transforming society. The complexities and hardships come out, but so does the innovation and optimism. One reality is front and center: the similarities between Cuba’s youth and youngsters in the rest of the world and a strong desire to have a normal relationship with the U.S.

How would you describe the concert?

JS: I can honestly say that I have never seen so many hip Cuban millennials come out on the streets in one day. It was jaw-dropping seeing all the faces in that crowd. Major Lazer was unsure of the depth of their popularity, and was hoping for at least 20,000 fans, and instead walked out into a sea of 400,000 bodies as far as the eye could see. Words cannot describe the love exchange between that crowd and the band that day. It was electric.

CL: The concert was symbolic of the moment. This was Cuba’s moment. It occurred right before President Obama’s visit, a little over a year after the announcement to normalize relations and in the middle of a flurry of visits by U.S. execs and Hollywood Celebs and a new wave of Airbnb-staying Americans. The private sector in Cuba was booming; techies were launching startups, Cuban art was selling like crazy and bars, restaurants and hostels were popping up overnight. Cuba was the place to be, it was on the cusp of change, things with the US could only get better and there was no turning back. You could feel that energy at the show as 450,000 Cubans jumped up and down, waving Cuban and American flags, smiling, screaming and crying for 4 hours.

Weeks later the Rolling Stones performed a concert for a large crowd, what was different about the two concerts?

JS: It’s interesting because both shows were legendary in their own ways, but I sensed a bit of generation gap. When I looked into the crowd during Rolling Stones, I saw several blank faces of Cubans who were not familiar with many of the songs, but were still grateful. During Major Lazer’s performance,however, folks belted out the lyrics while jumping up and down in a synchronized frenzy the entire set. It was just simply more high-voltage energetically. The Major Lazer performance seemed a cathartic experience for young people, whereas the Rolling Stones show had a bigger stage, impressive screens, and large production toys. An overall treat to experience both in Cuba.

CL: The energy. The Major Lazer concert was a celebration of better relations with the U.S. and Cuban youth finding their own way. It really seized on that moment in history, both of US-Cuba normalization and generational change on the island. The ages of Diplo and the other artists and their style of music resonated with young Cubans and they were grateful Major Lazer came to share their music with them. Just watch Give Me Future, the energy and excitement that day was so strong. The Stones was interesting and a treat for older Cuban fans of rock, but it wasn’t representative of much; just a concert. Major Lazer was much more.

The film portrays a changing Cuba and strong millennial movement. How accurate is that description?

JS: There is no doubt that Cuba is in a place of transformation. Media is moving faster than ever in this world and Cuba is adjusting to this age of information in its own unique ways. I also believe the film illustrates a youth culture that is eager to engage with America, perhaps without the trepidation of their parents and grandparents generation.

CL: Some parts of the film are oversimplified or exaggerated. However, the general idea that information is reaching the masses through expanded internet access, el paquete(the underground Cuban Netflix on a flash drive) and increased travel abroad is spot on. The film also captures the talent and creativity of youth on the island and a movement to employ those capacities in technology, entrepreneurship and global movements.

What was the biggest challenge with the project?

JS: Production challenges in Cuba? The usual suspects. Basic lack of internet. Basic lack of technical resources. All these things which we can sometimes take for granted in the United States. Also, too much state control can hinder magic moments. For example, we would have loved to film Orishas frontman, Yotuel, singing to the Cuban audience.

CL: Bureaucracy in Cuba is a terrible challenge. President Raul Castro himself has acknowledged that many projects and policies are stalled because of red tape from bureaucrats. Many U.S. artists have wanted to perform in Cuba and decided against it because the permissions come in at the last minute, making logistics more difficult and complicating sponsorships, travel packages and other important components. The approval process and working out key details of the concert were certainly the biggest challenges, but Major Lazer’s team, the lawyers and Musicabana organizers did a great job.

What is your advice for artists hoping to follow in Diplo’s footsteps?

JS: During the film we see Diplo speaking to Havana’s Producers and DJ’s during an exchange talk. He urges them to press forward, to keep doing their work, and despite their lack of resources, the internet is really all they need to be discovered. “A good song can travel word of mouth” he tells them.

CL: Patience and good communication are crucial. Respect for local culture is essential. Developing a show that’s a win-win for everyone is a must (artists, the Cuban people, the Cuban government). Artists need to look at it as something bigger than just a one-off show, since things in Cuba and with US-Cuba relations are complicated. Artists need to identify partners and build trust. Taking those things into account, there’s a lot of potential for mega-concerts, music festivals and other large events in Cuba.

Many Cubans didn’t know who Diplo was prior to the concert. How do they feel about him now?

JS: If you didn’t know who Major Lazer was before the concert, well, now you know him! It was impossible to walk around Havana that week without hearing about Major Lazer coming to town. We have the paquete to thank for that too, and Cuba’s resilient DIY culture. Watch the movie and this will make sense.

CL: He’s a hero amongst many. His music brings back memories of a very special day and a great moment in US-Cuba relations, putting smiles on many faces. Hearing Cubans happily say Deep-Lo (Spanish pronunciation) never gets old!

What impact did the concert have in Cuba?

JS: I think the concert opened a door that cannot be closed. When we filmed this, we believed this concert was just the beginning of more US bands coming to Cuba. It was supposed to celebrate a new era, but alas, Trump arrived, and relations have frozen yet again. I think the concert as well as the documentary now have a different context — that is, how do we get back to this place of constructive dialogue? I think the concert showed us all that music can punch through walls, and we need to do more of this.

CL: It sent a clear signal to both governments, Cuba and the US, that politics should not and cannot separate our two peoples. It was a key moment in the normalization process. Trump is a bump in the road. Diplo will come back and so will many others.