2015 Summit of Americas Could be Tipping Point for Cuba Embargo 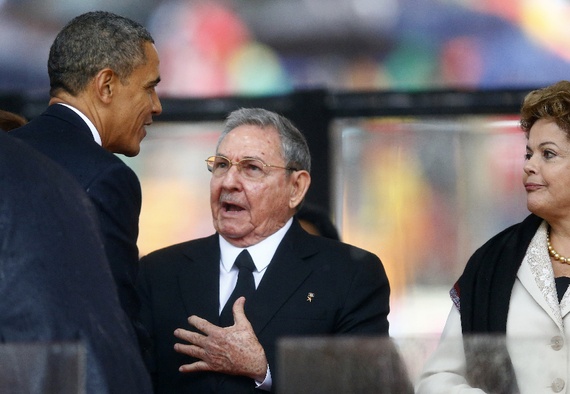 How President Obama can make things Right with Cuba

And while Washington has publicly voiced displeasure at the development, Panamanian officials say the United States has privately signaled its acceptance of Cuba’s attendance.

The fact that the coalition of member states even has to get “permission” from the U.S. is ridiculous. Especially considering that the U.S. has consistently cited an 2001 agreement which mandated that a strict respect for the democratic system was a necessary condition for attendance. Talk about lobbing boulders from inside the walls of a glass house.

Fortunately, it looks like Cuba will be represented this year, as it should be. But it’ll be interesting to see what the agenda looks like, and how President Obama reacts to two issues that I believe will be front and center.

The first is the United States’ continued war on drugs. Not only has this war cost U.S. taxpayers more than $1 trillion, but countless lives both within and outside our borders. There are some Latin American countries that have voiced support of focusing less on counter-narcotics policies and more on public health as a response to failed drug policies of the past. This is a rational and intelligent response, yet it’s one that U.S. leaders can’t seem to grasp.

Whether this is intentional as a way to reward political donors from the private prison industry and law enforcement unions or it’s unintentional and simply highlights the incompetence of many of our elected leaders is unknown.

But if President Obama really wants to create stronger relationships with our neighbors to the south, he would be wise to work with the Latin American community instead of against it.

The other issue is, obviously, the Cuba embargo. I don’t know if this will be a recognized point of discussion or something that simply goes down behind the scenes, but the United States’ embargo against Cuba is one of the worst policies ever to be implemented. Not only has it failed miserably, but it’s done an enormous amount of economic and social harm to the good people of that island nation.

Ironically, Secretary of State John Kerry told reporters that the 2015 summit would focus on democracy and human rights. If you want a perfect example of human rights violations, look no further than the Cuba embargo.

The Will of the People

I get that this embargo is still in place simply to placate a dying breed of politicians and voters. But most folks in the United States want to see the embargo come to an end while rebuilding relations with Cuba. This is the will of the people.

The 2015 Summit of Americas represents the perfect platform for President Obama to take a stand for freedom and human rights. But I’m not holding my breath because last week, President Obama renewed his authority under the Trading With the Enemy Act to extend the U.S. trade embargo on Cuba for another year.

Although this directive is really just an administrative procedure, it still sends the message that bureaucratic buffoonery and partisan nonsense trump rational thought and free markets. And that’s an unfortunate tragedy for all of us.