Ray Magliozzi of ‘Car Talk’ Takes to the Road in Cuba 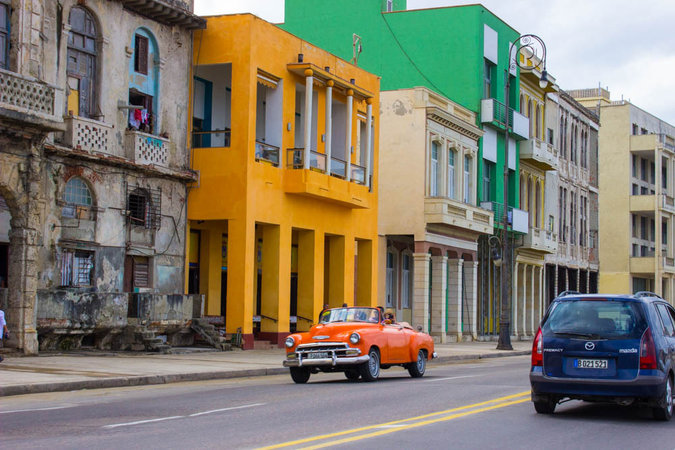 For Ray Magliozzi, visiting Cuba offered a nostalgia trip to the cars of his youth, though Cuban cars today have few original parts. Credit Bestride

With his late brother Tom Magliozzi, Ray Magliozzi hosted the National Public Radio show “Car Talk,” now airing as “The Best of Car Talk,” for 25 years. Since ending the show in 2012, Ray Magliozzi has continued to write a syndicated column on cars and contribute to the Car Talk website, which attracts the motor-obsessed as well as fans of the Magliozzis’ infectious humor. Recently, Mr. Magliozzi took a trip to Cuba, where midcentury American cars famously rule the roads. Following are edited excerpts from a conversation with him.

Q. What cars did you find in Cuba and how are they possibly still running?

A. So the 1959 Cuban revolution takes place, and at that time there were predominantly American cars on the road and American parts and dealerships, like an adjunct of what you’d see in Florida. Then the embargo starts and no one knew how long it was going to last. But they had parts available so the cars kept running. Then when they ran out of parts, they had a lot of “parts cars.” That lasted about 20 to 25 years of cannibalizing cars. Who knows how many it takes now to make one car, but when they ran out of what could be scavenged, they ran into ingenuity. What we saw were beautiful cars. The 1957 Chevy taxi we rode in was beautifully maintained. But it was not original by any means. A lot of cars had Hyundai diesel engines. They’ve taken out the original engines and transmissions and transplanted a Hyundai drivetrain. These are simple and durable and relatively new. Those vintage cars are outwardly restored American cars, and if you didn’t know any better, you’d say, “Wow,” but that’s part of their ingenuity — to rip out engines and create something more reliable and newer and something you can get parts for.

What’s your impression of the car community in Havana?

On the first day, we were picked up in an old Ford and a ’56 Chevy. They took us for a ride down what’s called Avenida Quinta where all the fancy houses were. I was surprised at how many people were out for a Sunday drive. I think it’s because Cubans love cars, and they love them even more because they can’t have them, especially since cars are so central to their culture. They are obviously doing business — it’s one of the few businesses allowed — and they’re doing it because they get a great satisfaction from taking something banged up and making it work again.

Where would you send travelers to Cuba who are interested in cars?

I would park myself, no pun intended, at the front entrance of Hotel Nacional de Cuba, which is the fanciest hotel, I believe, in Havana. The lobby is breathtakingly beautiful, and there’s this constant parade of taxi cabs coming and going at the Nacional. You’ll get to see the best of the best. I wouldn’t be surprised if they’re culling the ugly ones. You’ll get to see beautiful cars. I sat one day for an hour or two and just watched. It’s a nostalgia trip for me. It’s cool seeing cars from my youth. In the ’50s you knew every car that came out. The looks changed so much year to year. Cars then were so easy to spot. I was able to do that at the Nacional.

I had heard that the cars were O.K. and that the roads were so bad you’re not able to do more than 20 miles per hour. That was hardly the truth. Some roads were difficult and impassable but most streets in Havana are at least as good as the streets in Boston. They’re not ravaged by salt and ice. And the cars are able to drive 50 to 60 miles per hour. Of course there are no airbags, no seatbelts, and all the things we’ve become accustomed to, to save our lives.

Assuming the cars were your favorite, what was your second favorite thing about Cuba?

My other favorite thing was the warmth of the people we met and their ingenuity. Their resilience was revealed in the cars. They just wanted to drive. They could have given up the cars and relied on buses and walking, and there are motor scooters, but somehow the cars are a link to the past when America was their friend. I think it’s a longing for the days when they would freely travel to the U.S. And lots of people were happy to see us when we told them we were from the U.S.A. I’ve been to plenty of those old car parades, and you see enthusiasts there, but those are different folks. I don’t know what made the average Cuban who restores old cars get into it, but they are cut from different cloths from what you see in this country.